The Long Walk to Human Dignity

You are here:
CityEventsSafety and Justice Campaign 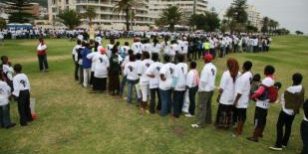 An expanded version of an article by Angy Peter and Gavin Silber, which appeared in today’s City Press.

CAPE TOWN, 21 March 2010 – This weekend people across the country mark Human Rights Day. Today marks the 50th anniversary of the Sharpeville massacre on 21 March 1960. Deep sorrow and joy enter our thoughts when we pay tribute to those who died for the rights we enjoy today. The 69 people brutally massacred and the hundreds injured at Sharpeville peacefully demanding the scrapping of the Pass Laws. These laws were arguably the colonial and Apartheid state’s cruelest acts which denied freedom of movement and dignity to the majority of Black people.

We have come a long way – on Saturday the Social Justice Coalition (SJC) staged a protest on the Sea Point promenade – one that would have been impossible under Apartheid. However the struggle is not yet won – millions of working and poor people are routinely deprived of the rights that many of us take for granted. One that stands above all else, is the constitutional right to human dignity.

Last year, Ntombentsha Beja – a 75 year old resident of Makhaza, Khayelitsha was stabbed in the chest while walking to a toilet ten minutes from her home. She is not alone – men, women, and children risk robbery, assault, rape and murder daily when using a toilet.

Clean and functioning toilets, safe water sources, drainage, refuse collection and maintenance are grossly inadequate and in some cases non-existent in Khayelitsha. Accessing and using a toilet – the most unspoken and private of our basic human rights – can be life threatening.

Insecurity is not limited to crime, but often injury resulting from the underdeveloped urban environment. Zanele Xaki –a 14 year old living in RR section – was on her usual route to relieve herself behind a bush alongside the N2. The trek requires crossing the ever hazardous Lansdowne road. She was hit by a passing car, sustained serious abdominal injuries, suffered from severe post-traumatic stress, and dropped out of school for months. Zanele is not alone. A great deal more pedestrians die on Khayelitsha’s roads than any other district in the City (more than double the rate of pedestrian deaths in the heavily urbanised Cape Town district), often while taking the long walk to access basic services. Others have been electrocuted by makeshift electrical cables, attacked by stray dogs, and have fallen and injured themselves due to lack of decent paths and lighting.

The existing state of toilets and water services also results in a very high prevalence of waterborne diseases and parasites – including gastroenteritis, worms and diarrhoea. The latter is one of the leading causes of death for children under five. Raw, foul sewerage has flowed around Noaskile Thethayuthi’s shack in RR section for over a year. Her three young children have diahorrea on an almost weekly basis. Despite assistance from the SJC and repeated promises from City officials, the situation is yet to be resolved.

Reasons for the dismal state of sanitation in informal settlements abound with no easy solutions. The most obvious challenge can be simply reduced to the quality and quantity of toilets. The law stipulates that there should be no more than 5 households per toilet. The City of Cape Town admits that the average currently stands at 12.6 households per toilet – very many are dysfunctional. A variety of bucket systems exist (the notorious black bucket, chemical toilets, and porto-potti). None qualify as basic sanitation under existing regulations.

The porto-potti (a plastic toilet with a detachable tank commonly used by campers) and black buckets (literally that) are particularly dangerous, as they are generally placed inside dwellings and users are very seldomly informed about the potential health hazards. Once the porto-potti tanks are full they are often placed at inappropriate and unregulated collection points. It is very common to see faeces spilling out of the vats directly around communal taps, in homes or in areas where children play.

Regulation and enforcement of measures to maintain public health and sanitation facilities are inadequate. Formal toilets are never cleaned by the City, but rather left to “the community” to maintain. With such high us levels, this is often impossible. Toilets are often blocked due to people flushing newspaper for want of toilet paper, and these are often left to fester for months or even years, as is the case with Noaskile Thethayuthi.

On Tuesday Western Cape Premier Helen Zille expressed regret for toilets in Makhaza being built without walls or ceilings, and acknowledged that this was an affront to residents’ “human dignity and rights”. This should certainly be welcomed, but it will come as small consolation not only for those living in Makhaza who continue to be forced to relieve themselves in the open, but also the 500 000 people in the City of Cape Town who do not have access to basic sanitation services (half of with no access to sanitation services whatsoever). Resource allocation – both human and financial is directly related to these issues. The Constitution demands that all budgeting should redress the imbalances of the past , yet this is not always the case in practice. The City’s informal settlements are at present grossly under staffed and resourced – 2.6% of the city’s Water and Sanitation personnel work in these areas, which directly receive only 1.7% of water services revenue, despite informal settlements housing at least 20% of the City’s population. A significant increase in investment in informal settlements is essential if we are to help those who are most in need.

A more fundamental issue relates to the broader approach to the development of informal settlements. There is a distinct lack of long-term strategic planning. This is in part due to a common perception that these settlements are temporary, when in fact many have existed for decades. Furthermore, evidence suggests that they will be around for many years to come – 48 000 people move into the City each year preventing the City from reducing its housing backlog. The backlog has in fact increased from 23 000 in 2003 to 128 000 in 2006. Simply put, the City can’t keep up given its current allocation of resources and it is their duty to deliver basic sanitation (as opposed to temporary “emergency level” sanitation) to informal settlements as outlined in the Water Services Act. This development cannot happen without genuine partnerships between government and the community – clearly absent in the Makhaza open toilet incident. At the same time, communities need to unite beyond neighbourhoods to organise for basic services and decent housing to ensure that their basic rights are realised.

The SJC queued outside a public toilet in Sea Point over the Human Rights Day weekend to draw attention to inequality and indignity. In this area – as in other affluent suburbs – public toilets are cleaned and maintained regularly by a dedicated caretaker, well lit, and monitored frequently by security personnel. This is in stark contrast to Khayelitsha’s public toilets, which are unsafe, never cleaned or maintained, nor provided with the luxuries of toilet paper or a simple toilet seat.

The event was arranged to coincide with “The World Toilet Queue” an international campaign being held from 20 – 22 March 2010 (coinciding with World Water Day) to draw attention to the 2.5 billion people globally who do not have access to a safe and clean toilet.

Our struggle for human dignity is not over. Sharpeville was a turning point in our history. It illustrated that Black South Africans were no longer willing to be deprived of their dignity. We will queue – rich and poor, man and woman, young and old, white and black – to stand in solidarity with all those who are still struggling for dignity.