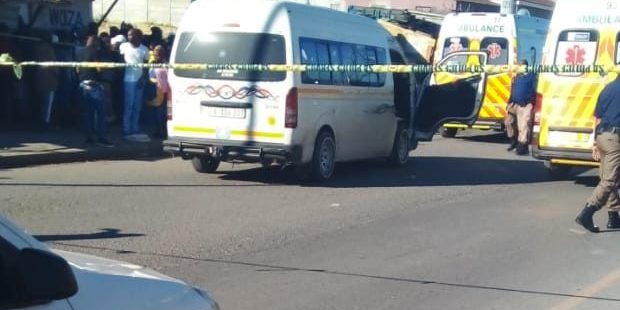 The turf war between the Cape Amalgamated Taxi Association (Cata) and the Congress of Democratic Taxi Association (Codeta) has claimed over 80 lives since the beginning of this year, more than 20 of them lost their lives this past month. This is not the first time that this has happened. In fact, to magnify the extent of this crisis, a taxi violence private security unit exists to protect taxi bosses and taxi operators. This illustrates that the possibilities of violence have become part of the taxi users’ commutes and yet, nothing has been done by the state to rectify this.

The violence displayed by the two warring taxi associations has been brute. Taxis are shot at despite there being numerous passengers on board, in the past month, men from rival taxi groups shot at taxis heading in the direction of Cape Town city centre, three passengers sustained gunshot wounds. A GoldenArrow bus driver was shot in the  early hours of Monday morning.  According to Western Cape Transport MEC Mitchel Daylin, over 120 000 commuters were held hostage by the recent spate of turf wars .

In the press conference held on the 22nd July 2021 today by Minister of transport Fikile Mbalula, the minister remarked on the magnitude of taxi violence, he further mentioned how it’s nothing new. Taxi violence has rendered people imobile, claimed lives for years and no initiative from all levels of government have been made to regulate and monitor the fight for routes within taxi groups. This, in addition to an already existing range of problems within metrorail, illustrates that the Department of Transport has not done enough to ensure an efficient public transport system and this directly impacts the livelihoods of poor and working class members of our society.

Minister Mbalula acknowledged that the ongoing negotiations between members of government and the two taxi associations have not yielded any productive results so, thus, it is unclear how long poor and working class people will be stranded for. This does not only have economic implications on commuters who may have to either not go to work or arrive late, but it is a safety and security issue for those that have to walk at night in the absence of reliable transport. The safety and security concerns are further heightened by the high levels of crime and violence in our society, especially in the context of informal settlements where there is no adequate public lighting.

Close to 70% of the South african population uses taxi services. Historically the mode of transport developed over the need to transport black people to white areas for work. The group areas act was abolished many years ago, however its legacy still lives on. In the Cape metro, the routes that are currently being fought over carry black bodies every single day to merge the gap created by the aphartheid legacy. The distance from economic hubs is what has made the taxi industry the bloodline for jobs and opportunities for a majority of black people. The violence we are currently witnessing can not merely be reduced to “another taxi war”, it is a major blow to the lives and livelihoods of black people. Money needed for basic necessities is stripped from families when there is a taxi war, whether it is from a life lost or a job missed.  Government finding solace at another round of agreements between taxi groups as a good enough resolution after the bloodshed  we’ve recently witnessed is not enough.

The SJC calls for the government to find long lasting solutions to address the ongoing challenges of commuters both in the province and in the country at large. It is not enough for the government to keep treating this matter as though it is one of  haphazard nature, when in fact it has been ongoing for years. We further call on the ministries of Transport and police to come together with the provincial government of the Western Cape to find effective and lasting solutions that will ensure that the lives and livelihoods of black poor people are protected. In the absence of well functioning trains, this matter is one that is very urgent and we urge the government at both provincial and national levels to treat this with the urgency it deserves.