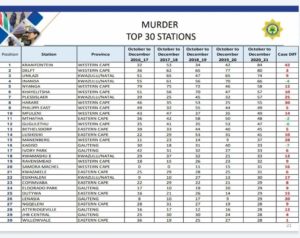 The Social Justice Coalition’s reaction to recent crime statistics presented by the Minister of Police.

On the 19th of February 2021, the Minister of Police Bheki Cele reported on the quarterly crime statistics from October to December 2020.

The crime statistics report showed an increase of 6.6 %  in murders nationally and in particular, the Western Cape had an increase of 11.2% in murders and a 22.5% increase in attempted murder cases.  This means that in comparison to the previous year, over the October to December period, 389 more people were murdered.  The statistics showed an overall alarming increase in violent contact crimes across South Africa.  Furthermore, the Western Cape has seen a sharp increase in hijackings where car jacking’s increased by 14.9%, truck hijackings rose by 103% and cash-in-transit robberies increased by 166.7%.

These statistics illustrate a structural and systemic failure from the government in ensuring safety and justice for people living in these areas. This is highlighted by the fact that middle class and poor black communities with insufficient police resources find themselves in the top 30 police stations for murders in this reporting period.

In his media briefing, the Police Minister Bheki Cele said the statistics expose some of the gaps that exist in policing certain crime categories.  However, as far back as 2014, the Khayelitsha Commission Report identified a few of these gaps.  The breakdown in relations between the police and the community of Khayelitsha was found to be one of the issues contributing to the inefficiencies with South African Police Service (SAPS).

Recommendation 6 of the Khayelitsha Commission Report spoke to the need to increase visible policing in informal settlements.  To date at both national and provincial levels, no guidelines or practical plans for providing visible policing in informal settlements exist.  The failure to implement these recommendations continues to create an environment that allows violent crimes to increase both across South Africa and in the Western Cape specifically.

Police human resource allocation also remains unaddressed by the minister. Inexperienced new enlistments tend to be allocated in informal settlements which are the hardest hit by violent crimes.  The SJC cannot help but question the minister’s claims over concerns over the latest statistics when communities such as the community in Macassar/Makhaza are still waiting for police stations to be built.  Communities cannot be expected to report crimes and enjoy safety and security when the minister is creating barriers that hinder poor black people from accessing police services.

The top 30 police stations for murder cannot be read outside the socio-economic lens in which these communities exist because it affects their allocation of police resources by SAPS.  In December 2014, the Equality Court handed down a judgment in the case of Social Justice Coalition and Others v Minister of Police and Others where the allocation of police resources in the Western Cape was challenged, the court made a ground breaking ruling where it was held that poverty is an unlisted ground for unfair discrimination.  The judgement illustrated that the allocation of police resources in the Western Cape specifically, discriminates against Black and poor people on the basis of race and poverty.  Evident in these crime statistics, the police stations with inadequate police resources such as Khayelitsha, find themselves in the top 30 police stations for murder.  In areas with informal settlements there are still no guidelines for visible policing as called for by the Khayelitsha Commission. Thus, police still cannot effectively police informal settlements.

Some of the police stations in the Western Cape listed in the top 30 stations for murder that serve people living in informal settlements in areas such Delft, Nyanga, Khayelitsha, Harare, Philippi East, Gugulethu and Samora Machel do not have adequate public lighting.  The only form of lighting available for these communities is high-mast spotlights, which were the implementation by the apartheid government.  The inadequacy of these high-mast spotlights lies in the fact that they cast dark shadows these shadows are the perfect breeding ground for perpetrators being that  one can barely see them in these shadows.  The relationship between adequate public lighting and safety is widely recorded and it has a significant bearing on safety in informal settlements. Women face a particular risk of physical and sexual assault.  Recent research on informal settlements in the Western Cape showed that women are deeply concerned for their safety, poor public lighting also affects how women access shared toilet facilities at night.

Provincially the crime statistics reflect gravely concerning results on the prevalence of sexual offences.  Rape has increased by 7.6% with attempted sexual offences increasing by 12.9% in the last three months.  One of the main thematic focuses from the Khayelitsha Commission were that women felt unsafe as a result of being constantly let down by SAPS.  Thus, it is important to note the crime statistics for sexual offences only reflects the number of reported sexual offences whereas in reality, the numbers may be higher.  At the Khayelitsha Commission, LGBTQI+ activist and Khayelitsha resident, Funeka Soldaat reflected on her experiences with the police after being raped.  She explained before the Commission that the police failed to help her because of homophobia.  Soldaat’s experiences, alongside the experiences of other women and members of the LGBTQI+ community who have been failed by SAPS in the past, are among some of the reasons why women and members of the LGBTIQ+ community do not report sexual offences crimes.

The SJC reaffirms its commitment to working with residents of Khayelitsha and other neighbouring informal settlements, CPF’s, and other stakeholders to ensure a safer community for all.  The SJC will continue holding SAPS both at national and provincial levels accountable and implement advocacy programs that will ensure that everyone, more especially women, LGBTQI+ persons, children and people differently abled living in middle class and poor communities live in a violent and hate free society.

Nomathemba Masemula- SJC Communications Officer on either 0648071708 or