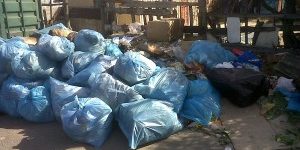 The Social Justice Coalition (SJC) has observed that refuse collection in informal settlements is often irregular and of very poor quality.  Refuse is often left rotting for days or weeks, contributing to the spread of disease.

Since 19 September 2011, Ndifuna Ukwazi (NU) (a partner organisation of the SJC) has requested the Supply Chain Management (SCM) office in the City of Cape Town to provide the public with access to the Service Delivery Agreements (SDAs) that govern the provision and maintenance of sanitation services, as well as the provision of community-based refused collection services, in informal settlements. Despite sending several emails and letters, making several phone calls, and threatening legal action, we are yet to see the SDAs which by law should in any event be immediately available to the public[1]. Without the SDAs, it is impossible to determine the particular duties of government and private providers to hold them to account.

We believe that where public money is being spent (here hundreds of millions of rands) on outsourced services, communities have a right to know what is being spent ‘in their name’ and for what purpose. We are concerned that officials at the SCM office have not timeously responded to our repeated requests in emails, phone calls and letters. Regrettably, they now belatedly claim that this is because they are subject to an annual audit which has prevented them from attending to our request.

It is astonishing that several city officials have not understood the urgency of the matter or the legal imperatives at play. The many delays and obstacles we have faced in accessing the SDAs is a violation of the law, as well as of our right to know. We do not want to live in a society where we continuously have to lodge formal requests for basic information, especially since this information should have already been publicly available.

For this reason we have asked Mayor Patricia de Lille to investigate this matter and to take it upon herself to immediately provide us and the public with the SDAs, as well as to investigate the conduct of officials in the SCM office. All SDAs should always be made publicly available, as that is what the law provides.

Private providers should also note that where they receive public money for the provision of basic services, we believe the public’s right to know trumps their commercial confidentiality considerations.