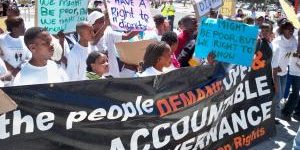 On 24 January, 2011 members of SJC joined community-based organisations, TAC, Free Gender, Triangle Project among others at the Coalition to End Discrimination demonstration outside of Parliament.  The demonstration called for the African Union to immediately end discrimination against the LGBTI community and demanded that the South African government implement further measures to prevent the targeting and harassment of South African lesbian, gay, bisexual, transgender and intersex people.

Below you can read the text of the memorandum.

EQUALITY FOR ALL:  AT THE AFRICAN UNION SUMMIT

Today, we assemble and picket for two reasons: first, we ask the Government of the Republic of South Africa to ensure that the members of the African Union end their repression and criminalisation of lesbian, gay, bisexual, transgender and intersex people (LGBTI). This repression and criminalisation violates international law. Second, we once again draw your attention to the hate-crimes against LGBTI people in our own country.

As a range of civil society, community organisations and individuals we address you with a sense of urgency. Some of our organisations are united in the Coalition to End Discrimination (a coalition against all forms of discrimination including on the basis of sexual orientation and gender identity) and we collaborate with the Lesbian and Gay Equality Project, the Joint Working Group annd other LGBTI organisations.

THE AFRICAN UNION AND LGBTI PEOPLE

Over the last 15 years, many governments across Africa including Zimbabwe, Ivory Coast, Uganda, Malawi, Sengal, Kenya, Namibia, Egypt and Swaziland have singled out LGBTI people as scapegoats. Together with some “religious” leaders, governments have used violent rhetoric, encouraged hate crimes and promoted the death penalty for LGBTI people simply because of their sexuality and gender identity. We call this the deliberate mobilisation of hate against vulnerable people.

The mobilisation of hate against LGBTI people has its roots in hunger, unemployment, wars, corruption, authoritarian rule, environmental disaster and a failure of leadership on the African continent.

African leaders have refused to promote equality in laws, constitutions and customary practices not only against LGBTI people but also against women, ethnic minorities and other vulnerable people. LGBTI people remain one of the easiest groups to target with hate and to divert attention from the real problems of the African countries, our continent and the world.

We urge the South African delegation at the African Union Summit to begin a discussion and process to change this mobilisation of hate by African governments against LGBTI people.

Against the wishes of many African countries, South Africa changed its vote at the United Nations General Assembly on 22 December 2010 to re-instate “sexual orientation” as a grounds for protection againsts extrajudicial, summary, and arbitrary executions. This is only a beginning. South Africa must work with African governments to stop hate speech, decriminalise sexual orientation and gender identity, promote equality for all people including women, statelesss people, ethnic minorities and LGBTI people.

As civil society organisations including LGBTI organisations, we commit once again to work with the Ministry and Department of International Relations and Cooperation to promote freedom, dignity and equality for all people on our continent and elsewhere. We will continue to organise local and global opinion against governments and agencies that use LGBTI people as scapegoats.

On 04 February 2006, Zoliswa Nkonyana, a Black working class lesbian from Khayelitsha near Cape Town was raped and murdered.  Five years later and there has been no justice for her family.

Hate crimes against Black lesbians including “curative rape” and murder has increased across South Africa. In a country with some of the most advanced legislation based on sexual orientation and gender equality, these crimes must be addressed as a matter of urgency and constitutional duty.

Hate crimes targeted at individuals because of their real or perceived identities have increased in our country.  These crimes include xenophobic or racist harassment, assaults and murders.

We appeal to the Justice Ministry to ensure that Parliament in its 2011 session adopts comprehensive antihate crimes legislation. In addition, we ask the Government through President Zuma to address the huge backlogs, inefficiencies and corrption in the criminal justice system.

The systemic weaknesses of the criminal justice system not only allows hate crimes such as that against Zoliswa Nkonyana to happen, they also lead to further injustices against victims and their families.

We hope that you will carry a message of freedom, equality and human dignity to the African Union Summit and we commit ourselves to ensure that locally and on our continent LGBTI equality is realised.