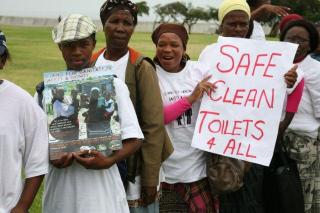 Cape Town, 23 March 2010 – On Saturday 20 March, the Social Justice Coalition (SJC) organised a queue of approximately 600 people outside a public toilet on the Sea Point Promenade as part of The World Toilet Queue – an international demonstration scheduled to coincide with World Water Day – to highlight the plight of the 2.5 billion people worldwide who do not have access to basic sanitation. It was also arranged to draw attention to the lack of basic sanitation services in the City of Cape Town and highlight how this affects residents’ health and safety, as well as the disproportionate investment in formal as opposed to informal settlements. It was further designed to coincide with the Human Rights Day weekend, to illustrate how numerous rights, particularly those of dignity and security, are still deprived to hundreds of thousands of Capetonians, and indeed millions more across the country.