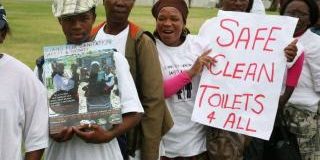 Cape Town, 23 March 2010 – On Saturday 20 March, the Social Justice Coalition (SJC) organised a queue of approximately 600 people outside a public toilet on the Sea Point Promenade as part of The World Toilet Queue – an international demonstration scheduled to coincide with World Water Day – to highlight the plight of the 2.5 billion people worldwide who do not have access to basic sanitation.  It was also arranged to draw attention to the lack of basic sanitation services in the City of Cape Town and highlight how this affects residents’ health and safety, as well as the disproportionate investment in formal as opposed to informal settlements.  It was further designed to coincide with the Human Rights Day weekend, to illustrate how numerous rights, particularly those of dignity and security, are still deprived to hundreds of thousands of Capetonians, and indeed millions more across the country.

On Sunday 21 March Alderman Clive Justus (Mayoral Committee Member for Utilities) released a statement (attached in addendum) condemning the event for being unfairly biased against the City of Cape Town and Sea Point, and drawing incorrect comparisons.  He includes various claims which are untrue, callous and that show contempt for poor people living in our city’s informal settlements.

The SJC is a Cape Town based organisation – with the vast majority of our member base located in Khayelitsha’s informal settlements. While we routinely acknowledge that inadequate and inequitable sanitation is a national problem, it is appropriate that we focus on the City. The Water Services Act expressly states that the provision of basic sanitation as defined by the Act is the responsibility of local government.

The SJC believes that every public area including the Sea Point Promenade should have decent toilets. But a greater, more equitable effort should be made by the City to supply basic sanitation to the poorest, as directed by our Constitution.  The particular toilet that we queued at in Sea Point is cleaned regularly, stocked with toilet paper and seats, has dedicated caretakers, is often patrolled by security and personnel, and is well lit.  It is a model public toilet. It is therefore suitable to draw a comparison between this safe and clean toilet, and those in informal settlements.  His claim that there are “no public toilets in other suburbs away from public or leisure amenities” fails to acknowledge that this is because people in these suburbs tend to have ample toilets in their homes or places of work, whereas in informal settlements residents are left with no choice but to use public facilities.

Ald. Justus claims that “there is access to toilets in Khayelitsha”.  This is very vague, but one would presume he means basic sanitation as outlined in the Water Services Act. If so, this is clearly not the case, as illustrated in both the statistics and the countless stories of residents who have to walk long distances to use a functioning toilet (or a bush or clearing, in many cases).  The city itself acknowledges that 45397 households don’t have access to “a minimum standard of service”, and a recent study by Water Dialogues shows that in fact the real figure is closer to 100 000 households (when using the criteria of “basic sanitation” as defined by the Act, which excludes bucket toilets).  At the event on Saturday four individuals shared their respective personal stories about being stabbed, robbed, hit by a car crossing a road to relieve herself in a bush, and threats of rape in attempts to use a toilet.  The alderman’s claim flies in the face of these people, and the thousands who suffer in Cape Town’s informal settlement each day.

It is insensitive and ignorant to say, as Ald. Justus does, that the problem lies with the local communities not maintaining the toilets that they are given. The fact that toilets are blocked is very often not due to “vandalism”, but the high use rates resulting from insufficient toilets, compounded with the fact that containerized toilets are never cleaned or serviced by the City. Toilets are left to reach a state of disrepair before they are given attention, at which point substantial investment is required.  As an example, the City refuses to supply toilet paper which results in residents being forced to use newspaper or plastic instead, which is then flushed down the toilet leading to blockages.     Equally worrying is the reference to “uncontrolled urban migration”. Is the Alderman proposing the reintroduction of influx control and other apartheid measures which kept the rural poor from accessing economic and other opportunities?  It is true that several tens of thousands of people move into the city each year, but this provides an even greater need to invest in providing basic sanitation services to informal settlements as the housing backlog grows and residents will need to live there longer.

While an invitation was not directly sent to Ald. Justus, invitations were sent to Mayor Dan Plato, Premier Helen Zille, and Mayco member for Community Safety JP Smith.  All of them tended apologies, but it is disappointing that not a single representative of the City was in official attendance. We were surprised to discover that JP Smith – despite earlier apologising for not being able to attend due to being out of town on 20 March – attended a DA “fun day” event right next to the toilet queue at precisely the same time.   A second invitation to join the growing toilet queue of hundreds standing in solidarity with those affected by crime and poor health as a result of inadequate access to toilets was made in person at the event, but was refused.

The SJC realizes that the issues of sanitation and safety are complex, and have always held that partnerships between the government and communities are required to make real progress.  Unfortunately, the alderman’s remarks serve to exacerbate tensions between civil society, affected communities, and local government.

He said:  “The protest by the Social Justice Coalition (SJC) also ignores the reality of uncontrolled urbanization, limited resources for local government and the fact that Cape Town is performing better than other metros.”

Executive Mayor Dan Plato who was busy with a meeting in Gugulethu during the protest and had advised the organizers beforehand, will meet with the SJC next week.

“In terms of the Constitution, local government has to provide access to toilets, rather than toilets per family or building.  There is access to toilets in townships.  Many of the toilets are damaged or blocked by vandals.  The theft of pipes and toilet components exacerbate the problem.  The City is also busy with a long-term programme to upgrade its more than 220 informal settlements, but finite resources and uncontrolled urban migration pose a major challenge.”

“It is also not fair to single out Cape Town for a national protest by the SJC when Cape Town is performing better than other metros.

“Government has a Constitutional responsibility to ensure that all South Africans have access to adequate sanitation. In delivering on this Constitutional intent, the City has essentially met a norm of one toilet for every five households in informal settlements. There are areas below this norm, due to the density of some informal settlements, geo-technical conditions and other factors.  The City is working towards improving sanitation by using a variety of sanitation devices suitable for local conditions,” says Ald. Justus.