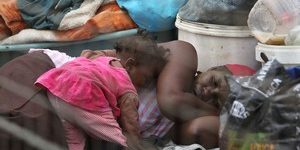 CAPE TOWN – Widespread xenophobic attacks broke out in De Doorns – a small grape/wine farming town just beyond Worcester – over the weekend, and peaked early Tuesday morning.  Reports of displaced people ranged from 500 at the outset to 2800 at its peak. Police claim that over twenty people have since been arrested (the majority for assault and public violence, but four for looting), and that there has been no significant subsequent violence since Tuesday.   A SJC team visited the area yesterday to assess the extent of the displacement, and responses by local and provincial authorities. Below is a brief report of the situation as it stood late Thursday afternoon.

The vast majority of those displaced were people from Zimbabwe, many of whom had recently arrived in De Doorns to find work during the harvest season. Locals (as well as some labour brokers) claim that farmers opt to hire Zimbabweans to work during the harvest, because they are able to pay them less, don’t pay them for overtime (it was claimed that many foreign labourers work seven days a week and over holidays), and tell Zimbabwean workers that they do not have the right to fair labour practices, the minimum wage and social benefits like UIF. A group of locals claimed that the local community have been upset about this for some time, and recently attempted to organise strike action for a universal minimum wage.

The law on the legal status of all Zimbabweans is clear. The political and economic crisis of the last fifteen years in that country has led to a mass refugee crisis in South Africa. The government has given Zimbabwean people the right to live and work for six months to earn money which will contribute to rebuilding the country, as most of the people want to return. Our labour laws protect all workers (legally documented or undocumented migrants) against the type of exploitation suffered by the Zimbabweans in De Doorns.

Some legal labour brokers claim that some farmers utilise illegal labour brokers, who are paid to source workers and are themselves responsible for deciding on what percentage to pay labourers. The De Doorns Table grape Association claim that all workers receive the same wage (despite nationality) and in some case receive more than the prescribed minimum wage. A closed meeting was convened yesterday for farmers, labour brokers, and members of the Parliamentary Labour Portfolio Committee. A decision was reportedly taken not to employ any further Zimbabweans until the situation is resolved. This is incredibly disturbing insofar as it sends a signal that violence will be rewarded. It is also clearly in contravention of fair labour standards. The SJC will be taking legal advice as to the legality of this decision, and potential subsequent courses of action.

We also visited the camp where the displaced are being housed, and found the following.

According to the onsite Disaster Management team (headed by Ray Veldtmann) there were approximately 717 displaced people with documentation and 250 without (practically all of whom were Zimbabwean), bringing the total official figure to just under 1000 people. At midday yesterday it appeared that there were only a few hundred on site, but we have been told that many of the inhabitants are working on farms during the day. It would also appear that displaced persons are leaving the camp to be housed on their employer’s farms.

Inhabitants are currently being housed in three large tents on a local sports field in the town centre. Two of the tents are 1000 m2 and the other 1400m2 in size. Upon inspection yesterday, none of the tents seemed particularly crowded.

Two meals are being served a day – about mid-day (sandwiches) and dinner (rice and protein). Inhabitants seemed fairly happy with food, but were initially unhappy with stocks of baby food and formula feed. The latter was due to be delivered late yesterday. There were some complaints that those who leave early for work did not get food.

The Red Cross, Paramedics and Doctors Without Borders (MSF) are onsite. Chronic medication (such as ARVs) is being provided as well as most essential drugs, however there was a shortage of antibiotics.

There are currently about 35 toilets onsite, with more en route. Fresh water sources are limited, but 50 additional taps were due to be installed this morning. There is a shortage of soap.

How You Can Help

The following supplies are most urgently needed: