The Right To Protest 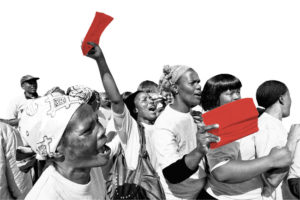 The Social Justice Coalition condemns the violent reaction received by EFF members by Brackenfell high parents and community members during their peaceful demonstration and protest earlier this morning outside Brackenfell High School. In a video uploaded by the African News Agency (ANA) and other news channels via their social media platforms , EFF members are violently confronted by ‘concerned parents of Brackenfell High school’. In the video residents could be seen running towards the protesters, pelting them with objects, asking them “what are you doing here” and telling them that they needed to leave immediately.

The EFF decided to protest over a private event held by Brackenfell High School parents that was allegedly only hosted for white pupils clearly excluding black pupils, despite various deliberations on the matter, it is a legal right that not only EFF members have the right to exercise but all South Africans and those who live within the bounds of our country. The allegations that black pupils were excluded and discriminated against need to be investigated by the South African Human Rights Commission forthwith and that is something we cannot shy away from.

Section 17 of the Constitution of the Republic of South Africa states that everybody has the right to protest, peacefully and unarmed, to assemble, to demonstrate, to picket and to present petitions, This includes protests which are non-violent. The conduct shown by some of the members of the Brackenfell community was violent and infringes on the EFF’s and other interested parties’ constitutional right to protest.

The Constitutional Court affirmed the importance of the right to protest when it handed down a landmark judgment in Mlungwana and Others v S and Another (the SJC10 judgment). The court declared section 12(1)(a) of the Regulation of Gatherings Act unconstitutional because that section criminalised the convening of all gatherings without a notice, including a peaceful and unarmed assembly.

The right to protest remains a vital tool in a participatory democracy context. Protests are one of the tools that ensure that citizens remain active participants in all decision-making that impacts them as well holding one another accountable. When marginalized communities decide to protest to express their views or dissatisfaction, it allows them a real opportunity to not only force a dialogue on the infringement of numerous constitutional rights but also allows for meaningful participation and engagement in the decision making of issues that affect them.

Denying people the right to protest takes away one of the many, but crucial tools towards maintaining a democracy, this undermines the promise in the Constitution’s preamble that South Africa belongs to all who live in it, and not only a powerful elite. It also frustrates a stanchion of our democracy; public participation and accountability.

For more information contact:
Nomathemba Masemula via email on or on 064 807 178