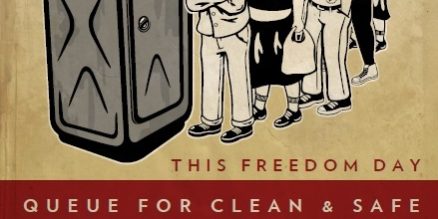 In two weeks time South Africans will celebrate Freedom Day – a day which commemorates seventeen years since we queued patiently to vote in our country’s first democratic elections. Much has changed for the better over this time, but many of our poorest citizens continue to wait for the delivery of basic services to reinforce the rights guaranteed in our Constitution to safety, health, life and dignity (amongst others). The most basic of these services and rights is access to clean and safe sanitation services. During the month of April, the Social Justice Coalition (SJC) will be holding two mass-protests aimed at illustrating our commitment to holding government accountable for ensuring that the most basic of human rights are guaranteed.

10.5 million people across South Africa and 500 000 people in the City of Cape Town do not have access to basic sanitation. Where toilets and water sources do exist, they are often unhygienic places of danger. The provision of sanitation services is a local government function widely held to be one of is most important. The SJC – as a Khayelitsha based social movement – will call on the City of Cape Town to commit to improving the state of existing sanitation services, and consult widely on improving the roll-out of basic sanitation services in the future. For every day that the City refuses to acknowledge these challenges and commit to addressing them, residents will live in fear and suffer an abundance of hardships conducting the most simple of bodily functions.

For people living in Khayelitsha and other informal settlements, vulnerability to crime is at its highest when trying to use a toilet. On an almost daily basis people of all ages and both sexes are robbed, assaulted, raped and murdered whilst walking to the nearest functioning toilet (or empty clearing, in many cases) or water source. Households that have been left empty are often burgled whilst residents go to the toilet. Women, children and the elderly are the most vulnerable and easy targets for criminals whilst using a sanitation facility.

The poor state of toilets and water services in many informal settlements results in a very high prevalence of waterborne diseases, parasites and gastroenteritis of infectious origin – including Hepatitis A and Rotavirus. The latter is one of the leading causes of death for children under five. Although the Metro District Health Services have made a concerted effort to address the high incidence of diarrhoeal disease, vulnerable areas that lack decent water, sanitation and refuse removal continue to experience the greatest burden. Khayelitsha continues to report high levels of diarrhoea in the peak season, despite a strong health promotion, prevention and treatment campaign. Advice on basic food and personal hygiene becomes impossible to follow if the environment is unfavorable.

Why Are We Queuing?

On 16 and 27 April, SJC members and partners will form queues outside the offices of local government leaders, where we will patiently and peacefully wait to use a toilet. This will serve to illustrate that many South Africans are still waiting for clean and safe sanitation services – basic services guaranteed to all citizens including those living in informal settlements. It will also serve to illustrate that while many queued to vote in 1994, democratic participation and active citizenship must be a consistent struggle. We will hand over a petition and memorandum addressed to the Mayor which demands: