PRESS STATEMENT: WE WILL OCCUPY THE CIVIC CENTRE BECAUSE POOR BLACK PEOPLE ARE BEING FORCEFULLY REMOVED IN 2018 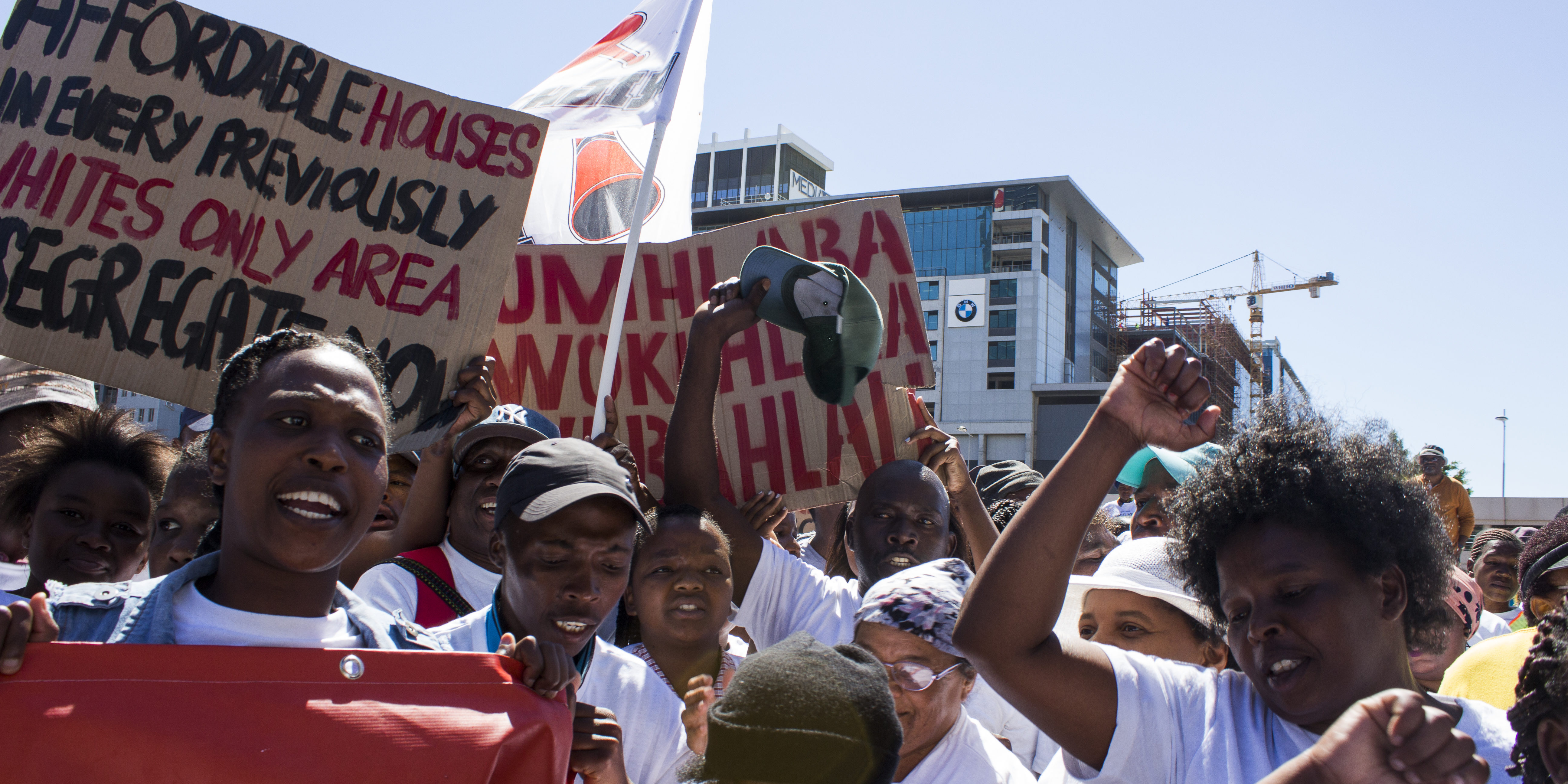 People have nowhere to go and are in need of homes. They are denied their dignity and the government refuses to listen to them. They no longer have homes, but also have no way to hold the City responsible and regain the homes they have lost.

On Wednesday 2 May 2018 Social Justice Coalition activists and residents of informal settlements will occupy the area outside the Cape Town Civic Centre to protest illegal evictions by the City of Cape Town. The protest will highlight how poor people no longer have homes. The City has destroyed them. People attempted to rebuild them, and the City destroyed them again.

On 11 April 2018, occupiers (the applicants), with the support of the Social Justice Coalition (SJC), filed court papers in the Western Cape High Court to interdict the City of Cape Town from demolishing their homes and illegally evicting them from the Island Informal Settlement in Makhaza, Khayelitsha. The matter will be heard on Thursday 3 May 2018.

People have nowhere to go and are in need of homes. They are denied their dignity and the government refuses to listen to them. They no longer have homes, but also have no way to hold the City responsible and regain the homes they have lost.

“We are landless and in need of homes and have nowhere to go… I have been on what government refers to as a waiting list for over 21 years with no indication that I will ever receive access [to] an RDP house or benefit from any government subsidy for poor people. I have knocked on all government doors to try get a home for my family,” said Andiswa Kolanisi, the first applicant in the case.

Andiswa is one of 217 applicants. Most of the applicants had their homes demolished on three occasions on 10 March 2018, 13 March 2018 and 3 April 2018. The City carried out these evictions, with the assistance of the Law Enforcement and Security Department and the South African Police Services (SAPS), without an eviction order as the law requires.

Section 8 (1) of the Prevention of Illegal Eviction and Unlawful Occupation of Land Act (PIE) could not be clearer: “No person may evict an unlawful occupier except on the authority of an order of a competent court”. Every level of government is aware of this law because every level of government has previously been and is currently confronted with the substance of this section in their respective jurisdictions.

On Human Rights Day this year, over 5000 people marched on the streets of Cape Town to demand, amongst many other things, that government at all levels must: “Uphold and respect the law and the Constitution. Black lives must be valued over property and money. The use of force arbitrarily by Anti-Land Invasion Units, reminiscent of apartheid-era dispossession, must end. The killings and brutal attacks at the hands of the State must end. The repression and threats to our comrades fighting for land and housing must come to an end!”

The City, in carrying out the illegal evictions in Makhaza, relied on an interdict which was issued in October 2017, six months before the unlawful evictions occured. None of the current occupiers were respondents in the application for the October interdict. This interdict was also never shown to the occupiers even though they asked for a court order on numerous occasions.

An interdict and an eviction order are two different things. The interdict the City relied on has a section explicitly saying, “The Order shall not be construed as an eviction order. It shall not entitle the City to demolish any occupied structures as at the date of this order or to use the provisions of this order for purposes evicting the occupiers under the Prevention of Illegal Eviction from and Unlawful Occupation of Land Act 19 of 1998”.

The City and its law enforcement officers ignored this provision in the interdict and demolished people’s homes and rendered them homeless.

But the City is claiming that the applicants weren’t unlawfully evicted because, the City claims, they weren’t occupiers and so the demolition of their homes was not subject to PIE since the “structures” were unoccupied at the time. The City claims they were preventing an unlawful occupation and not evicting unlawful occupants. The City is relying on the ambiguity of the term “occupant”, exploiting the fact that most people are not physically in their homes during the day or do not have many belongings, thereby referring to their homes as mere “structures”.

Troublingly, the City is also exploiting the fact that the people they are evicting are poor and do not have easy access to legal recourse, which is the only way they can hold government accountable. The City is actively taking advantage of their poverty to further dispossess them. The City’s actions are reminiscent of apartheid-era forced removals.

It is very disturbing that a group of mainly white men who occupy senior positions in the City of Cape Town’s law enforcement are dictating what constitutes a home for poor Black people, or what a home must have inside to be a home.

We have invited Cape Town Mayor Patricia de Lille to come and engage residents on 2 May 2018 and to explain why the City has not responded to the memorandum handed over on Human Rights Day, and why poor Black people continue to be made homeless by the City on her watch.

We hope the Court, on 3 May 2018, will hear the applicants, grant the relief they seek and hold the City accountable for the deeply troubling, unjust indignities it continues to subject poor Black people to.