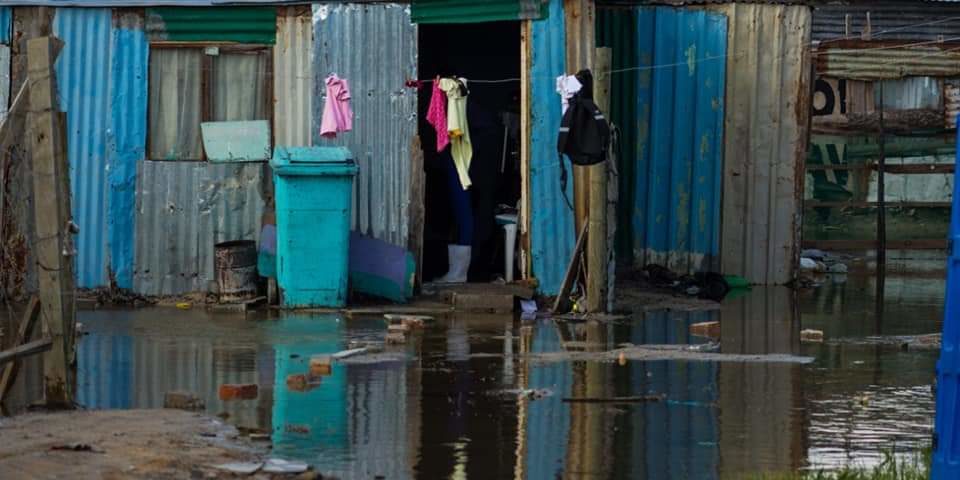 Over the past few weeks, Cape Town has been hit with disruptive snowfall, heavy downpours, and strong winds and waves reaching up to six meters. These storms have caused floods that have affected over 6000 people in the Cape Town municipality alone, affecting both formal and informal housing areas in the city. The impact of the storm, combined with faulty drains and stormwaters, has caused massive flooding in homes, residents of informal settlements were hit the hardest by these storms.

The affected areas in the City of Cape Town are Khayelitsha, Gugulethu, Phillipi, Mfuleni, Langa, Masiphumelele, Dunoon, Strand, and Hout Bay. In response to this crisis, disaster management from The City of Cape Town has not only been unable to adequately assist formalized residential areas across the Cape but stated that little to no assistance would be given to residents living in newly established informal settlements in The City of Cape Town.

Flooding in informal settlements is a recurring annual disaster in Cape Town, this is well known by all who live in the metro but despite this knowledge, there are no contingency plans made by the city to assist residents who are constantly affected by the annual floods. Chapter 4 of the Disaster Management Act (DMA) sets out clear instructions that each province is obligated to establish and implement a framework for disaster management, it further binds provinces to actively prevent and mitigate disasters. For this year’s round of assistance from the city, officials suggested that community members who have flooded homes in informal settlements use sandbags to mitigate the floods, included in their response to the crisis people found themselves in was the reminder that they should have not been staying in those areas in the first place. This was said by city officials who should have had a contingency plan to assist in the yearly disaster we all expected and anticipated but worse, it was said by officials that should be aware of the circumstances that force people to live in flood-prone areas in the first place.

It’s important to note that both formal and informal settlements in the Cape metro experienced flooding. For the past 8 to 10 months the residents of Khayelitsha, formal and informal areas, have had their streets flooded due to broken and faulty drainage and pipeline systems. Countless community members have reported their issues to the Social Justice Coalition (SJC) due to non-response from the municipality.  As far back as last year August, the SJC has assisted communities such as Taiwan in Site C and  BM in site B by helping them lodge online service requests to report faulty stormwater drains and the sewer blockages on The City of Cape Towns online system, to date none of these drains has been repaired. Water in informal settlements is not only undrainable but is also sewage ridden, children and adults are forced to be in contact with it every day.

Last year we had an influx of residents complaining about the increase in illnesses in their children. These ranged from minor to major health problems their children and the elderly were developing. Prof Angie Mathee from the Environment & Health Research Unit at Stellenbosch university explained that areas with dysfunctional wastewater systems may contribute to elevated levels of diarrhoeal diseases, helminthic infections, skin diseases and other ill health outcomes, especially in young children. These aligned with the symptoms community members had complained to the organisation about. Furthermore, Mathee, explained that areas with dysfunctional wastewater systems are a major public health concern. The increase of infections and diseases is happening at a time when our public health system is overloaded, we are currently faced with unprecedented amounts of patients filling up hospitals due to COVID – 19 infections, The illnesses we refer to above could have been easily avoided if the Cape metro followed basic municipal mandates.

In the 2020\2021 CoCt budget, the city had 5,227,925,000  in their reserve funds. These funds, amongst other things, are collected from unspent funds from numerous municipal departments such as housing or water and sanitation departments in the metro. Reserve funds are usually reserved for emergencies such as water crises to epidemics such as Covid-19.

The City of Cape Town did not increase or fast track an already gross sanitation system in informal settlements, but it failed to ensure that residents in these poor areas have the one thing needed to help mitigate the prevention of Covid-19, clean water and decent sanitation. Less than 1% of the budget, about (32,500,000) is needed to increase the number of basic services in informal settlements. This would leave the city with about 5,2 billion to pay for other things. There is no excuse for the conditions that people living informal settlements are subjected to under the Cape metro.

Stating all the instances in which The City of Cape Town has failed to meet its obligations, as per the disaster management act states each province is supposed to, would demean the many hours, trips and complaints made by civil society pleading with The City Of Cape Town to follow the mandate prescribed to them in the DMA. The disturbing reality is that every year people in the Cape Metro report floods and fires to a municipality that has funds allocated to help with the disaster, the same municipality scapegoats the poorest of those people in desperate need of help by telling them that they are the reason they’re facing the issue they’re currently in.

What we are left to contend with, is the reality of a municipality that seems to actively want to punish the poor and black for their existence.  And the next question we ought to ask ourselves perhaps is how we should report a municipal system that is anti-black and anti-poor.