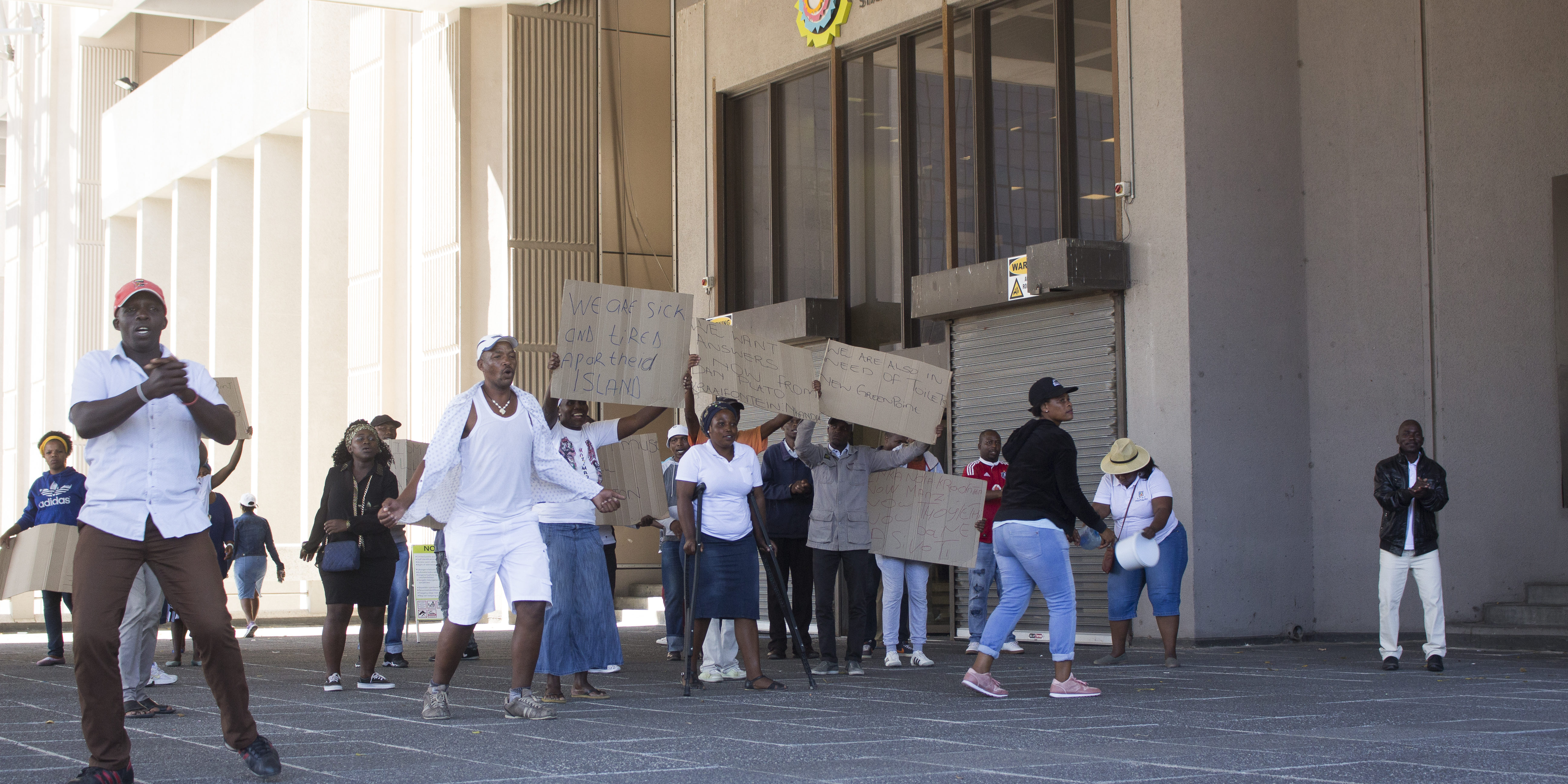 A group of less than 50 peaceful protestors were singing outside the doors of the Civic Centre, some with empty buckets to illustrate how they are forced to collect water from far away, as well as relieve themselves. Then SAPS showed up, armed with rifles, rubber bullets and stun grenades. There was no warning. No one asked why we were there. No one asked us to move. SAPS ascended the stairs, and immediately released a stun grenade. As people screamed and ran, a woman on crutches was knocked over and was unable to get away. SAPS then released another stun grenade.

From eyewitness accounts and video footage, it is clear that SAPS violently, and unprovoked, escalated a peaceful situation. Axolile Notywala, General Secretary of the Social Justice Coalition (SJC), angered and shaken by the unnecessary use of force, asked SAPS why they chose to use violence against peaceful protestors without warning. He asked them why they refused to help an injured disabled woman. They grabbed him and arrested him. They refused to identify themselves, which they are required to do by law as per Section 334 (2) (a) of the Criminal Procedure Act, or tell him why he had been arrested. While they were marching him away from the police barricade, SAPS officers still in the barricade reacted to the crowd of protestors scrambling at the bottom of the stairs by pointing rifles at them. The imagery of older, white men at the top of a staircase pointing rifles at a crowd of poor, Black people is a terrifying reminder of how little our police service has changed since apartheid. It is not the police service we need. SAPS does not serve poor, Black people but still exists to safeguard ineffective governance that prioritises the needs of white suburban communities over poor, Black communities. SAPS continues exists to brutalise and dehumanise “die swart gevaar”.

If SAPS had bothered to ask or issue a warning (an actual legal requirement, by the way), they would have found out that we were at the Civic Centre because communities occupying land in Island, Ses’Khona, Nkandla, Greenpoint and K Section wanted to meet with Mayor Dan Plato. This comes after the same communities marched to Civic Centre and handed over a memorandum in November 2018. The memorandum detailed the untenable situations these communities live in – with no access to water or sanitation. Some residents are drinking water from the same sources as animals. The Mayor’s response to that memorandum was that nothing could be done. So, we came back on Thursday to ask for more engagement. And, we were met with more violence.

This is not what a police service should do. Section 205(3) of the Constitution provides that members of the police service have a constitutional obligation to maintain public order, and not the opposite. SAPS should not be brutalising the people they are meant to serve and protect. It has become evident that poor, Black people are not served by SAPS. We are brutalised by SAPS in an environment in which we are already subjected to violence. And, we have no way of changing this because the legal system further silences and excludes us.

Axolile Notywala was not told why he was arrested, and some officers refused to identify themselves or tell Notywala’s colleagues why he was arrested. They also tried to prevent journalists from recording their brutality and unlawfulness. He was eventually charged under the Regulation of Gatherings Act (RGA) section 12(1)(g) and (j). This is the same protest law that the SJC has been challenging since 2013. In 2018 the Constitutional Court ruled section 12(1)(a) of the RGA unconstitutional, and stated:

“People who lack political and economic power have only protests as a tool to communicate their legitimate concerns. To take away that tool would undermine the promise in the Constitution’s preamble that South Africa belongs to all who live in it, and not only a powerful elite. It would also frustrate a stanchion of our democracy: public participation”.

The Constitutional Court acquitted the 10 activists who were arrested and criminally charged under the RGA in September 2013 while they were also protesting outside the Cape Town Civic Centre, demanding that then Mayor Patricia de Lille engage with them on the lack of a long-term, sustainable sanitation plan for informal settlements. Six years later, we are in almost identical situation. Nothing has changed significantly for us. But, nothing has changed with the ineffective, anti-Black and anti-poor way this City is governed and policed. Protests are meant to be disruptive. This is the nature of protest. It is an integral part of democratic political participation. Yet, government has consistently stifled protest and brutalised activists –  and in particular poor, Black activists.

There is a disquieting lack of avenues for genuine political engagement, and protest is one of the the very few Constitutionally-mandated ways poor, Black communities with no economic power can hold elected officials accountable and have their voices heard. Legal avenues require money that most of us do not have. We were only able to ensure Notywala was processed and released on the day he was arrested because the SJC had access to immediate legal representation. Most poor, Black people do not have this.

What SAPS and the City of Cape Town did yesterday was abhorrent. It was violent, uncalled for and reminiscent of apartheid. Sadly, this has been the norm for us, as poor, Black people, when attempting to engage with government. Do not be fooled by Mayor Dan Plato coming out to address us. Conveniently, this was after SAPS threw stun grenades at us, fired rubber bullets, and arrested one of us. This was mere optics from the City of Cape Town; a facade of engagement that they have been perpetrating for decades.

In the build-up to the 2019 elections, we refuse to accept the City’s and the Democratic Alliance’s retroactive politicking in our communities. Don’t come to us with empty promises, because now those won’t even secure hollow votes. We want to be heard. We want you to recognise us as people deserving of dignity, respect and humanity. We want to be taken seriously as full citizens. This is the least you can do. Recognising our value as people and engaging with us respectfully and non-violently is a very low standard for elected officials. It is time for this standard to be met.