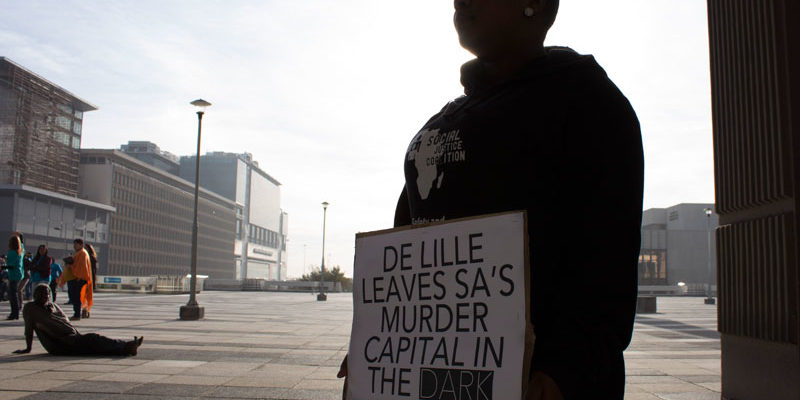 On Tuesday 19 February 2019 Social Justice Coalition (SJC) activists will march through Town Two, Khayelitsha at night to illustrate the difficulties residents face when attempting to navigate areas that have no or inadequate public lighting.

The SJC has attempted to engage the City of Cape Town (CoCT) on the issue of discriminatory public lighting to poor, Black wards across the City since 2017. The City’s responses have been non-existent or outright denials that there is anything wrong with the current use of high-mast lighting in informal settlements.

The primary purpose of public lighting is nighttime visibility in public spaces and on public roads. The City of Cape Town’s Design and Management Guidelines for a Safer City state that “[g]ood lighting is one of the most effective means of increasing levels of safety and deterring crime.” These guidelines characterise “effective public lighting” as lighting on poles approximately 3 meters high and at intervals of 8 to 10 meters. They pointedly state that “high-mast spotlights that cast dark shadows” should be avoided. The City currently places these high-mast spotlights at 300m intervals. High-mast lighting was introduced by the apartheid government in the 1980s, specifically for “Black African” settlements. In 2019, the CoCT is still using these lights in Black informal settlements.

A map showing the provision of public lighting across Cape Town reveals that effective public lighting is reserved for nearly all streets in predominantly white and coloured neighbourhoods. The same map reveals that many roads in poorer Black and coloured communities are not provided with the same effective public lighting. In Khayelitsha the vast majority of formal, tarred streets have no effective street lights. Instead, Khayelitsha is predominantly provided with high-mast lights. These high-mast spotlights have never been installed in former whites only, middle-class suburbs. This obvious inequitable allocation points to discrimination on the basis of race and poverty in the provision of public lighting.

We have invited politicians to join us tonight at 9pm when we will walk through Town Two, where residents cannot use the toilet safely or walk to and from public transport safely because of the danger that darkness brings.

When engaging with the City of Cape Town, we have received numerous responses from them that are inadequate and do not engage with the issue at hand, but rather shift responsibility from local government, which is where it ultimately lies. We urge journalists, in the interests of democracy, justice and equality, not to accept the following responses from the City, and to challenge them on these responses.

Justifying the discrimination using any of these reasons has no merits. The vast majority of road users and informal settlement residents aren’t criminals. Forcing them to live in the dark because of the crimes of a few would amount to communal punishment. Solutions to the issue of copper theft have been developed. Instead of having cables run along the ground, cables can be spun between the top of lamp posts. In addition, connectors on each post can ensure that only a single length of cable between posts can be stolen at a time making it that much harder and riskier to steal. The City’s own Design and Management Guidelines for a Safer City acknowledge these issues but places a requirement on the City to mitigate the impact. One of the solutions the Guidelines suggest is the installation of CCTV cameras.

Even though this might be true the responsibility of providing public lighting infrastructure ultimately rests with the City of Cape Town. If Eskom limits or restricts the ability of the City to deliver this service the City should file an intergovernmental dispute to remedy the situation. If this step is required, the Social Justice Coalition would support such an action.