Today the Minister of Police Bheki Cele revealed the quarterly crime statistics from January to March 2021. In his presentation he hig 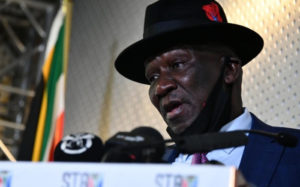 hlighted that SAPS implemented crime preventative measures in efforts to combat crime. These measures have resulted in a significant decrease in aggravated robbery and property related crimes. From this, it is apparent that crime prevention is an integral part in decreasing crime, but why has the minister not implemented the same preventative measures to protect women and LGBTQI+ persons in an effort to fight gender-based violence and harassment? Crime in South Africa is an intersectional issue. This means that marginalised and vulnerable people such as women, people living in poverty and members of the LGBTQI+ community witness and endure a wide range of crimes due to their positionalities. This, alongside other structural factors such as the failure of the police to be visible and adequately police informal settlements, means that these marginalised identities are constantly denied their rights to justice. It is for this reason that the SJC finds the apology from the Minister unacceptable and a continuation of an act of lip service without action from the government. In a time where there is a war waged on women’s and queer bodies, an apology does not represent justice. Until actions are put in place to ensure the safety of women and other marginalised identities, we will continue to see forms of gendered crimes waged on these identities. Fighting for justice and equality! www.sjc.org.za We welcome the 3.9% decrease in sexual offences; however, we are cautious in celebrating these figures. The statistics released by the minister only account for women who have been brave enough to come forward and report their cases. Our policing and criminal justice research particularly on gender justice and policing in informal settlements has shown that women in Khayelitsha and other informal settlements are reluctant to report cases of sexual offences and GBVH. The 2014 Khayelitsha Commission of Inquiry revealed that the relationship between SAPS and communities in Khayelitsha has completely broken down; this mistrust continues 7years after the recommendations from the commission were published. At the Portfolio Committee on Police held on the 7th of May, Joemat-Pettersson who chaired the meeting raised the need to improve police service delivery as a huge concern in the Western Cape. The chair mentioned two disturbing incidents from Khayelitsha and Langa that spoke to this issue. In March this year, a woman from Site B in Khayelitsha went to a police station to report that she was sexual assaulted and was told by the police officer on duty that she must investigate the matter herself. The second incident took place in Langa, where a woman reported that she had been raped and ended up being sexually assaulted by the police officer she was reporting her case to. Such incidents of women being disregarded by members of SAPS when they have experienced sexual crimes shows that perhaps, SAPS has to be more intentional about teaching its officers about the Sexual Offences Act and other related Acts as per the recommendations of the Khayelitsha Commission of Injury. Furthermore, members of the SAPS who commit such crimes must be held accountable for their crimes. It cannot be that women experience such secondary victimisation from members of SAPS who are meant to serve, assist and have a constitutional obligation to protect. SJC wants the Minister of Police to increase his efforts towards operational oversight in the Western Cape precincts and deal with operational issues so that police resources are adequately deployed and allocated to enable visible policing in informal settlements that are hardest hit by violent crime.