You are here:
Commision of inquiryPress releasesSafety and Justice Campaign 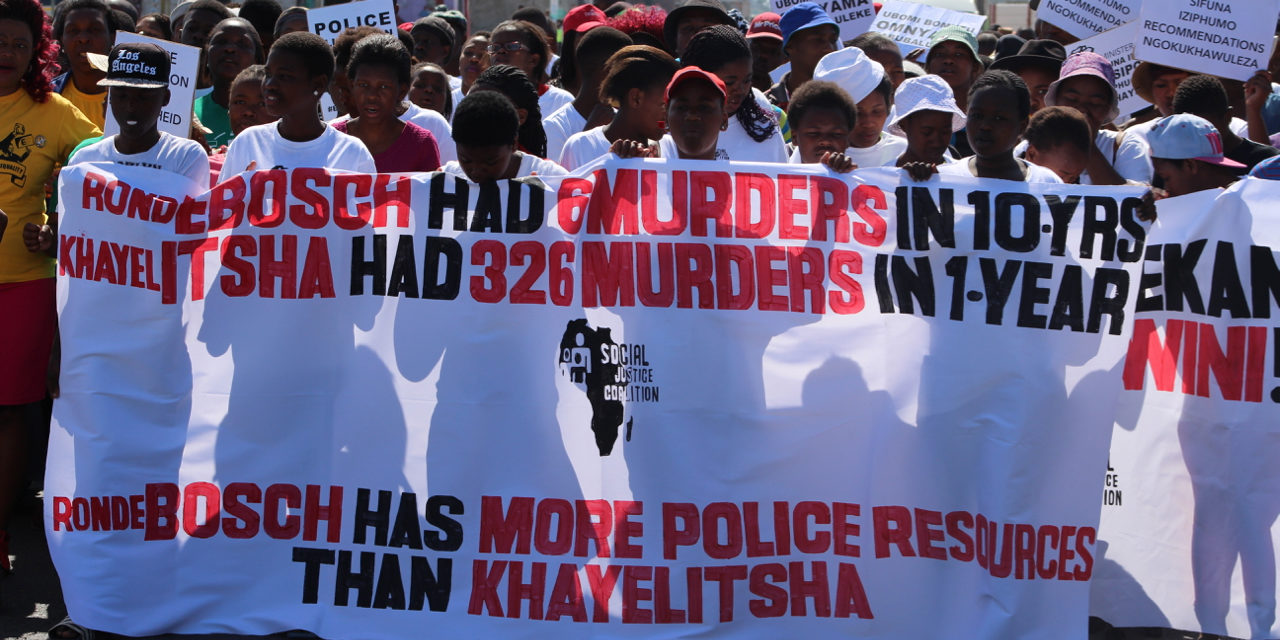 A victory for poor, Black communities confronted by high rates of contact and violent crime as Court rules that the allocation of police resources by SAPS is unfairly discriminatory

On Friday, 14 December 2018, Judge Dolamo of the Equality Court, Western Cape Division, made a ground-breaking judgment (attached) that has considerable consequences for poor, Black people in South Africa. The Court declared:

This order was made following an application filed on 31 March 2016 by the Social Justice Coalition (SJC), Nyanga Community Policing Forum (both represented by the Legal Resources Centre) and Equal Education (represented by Webber Wentzel) to compel the South African Police Service (SAPS) to remedy the manner in which it allocates police officers to police stations. The respondents in this case were the Minister of Police, the National Police Commissioner, the Western Cape Provincial Police Commissioner and the Western Cape Department of Community Safety.

It was argued in this case by the applicants that the current arrangement is discriminatory as it provides more police officers to stations servicing rich, white populations with low contact crime rates, and fewer police officers to stations serving poor, Black (including both African and Coloured) communities with high contact crime rates. The result is that residents of these Black communities are less safe, more at risk of crime, and their constitutional rights are more likely to be violated.

The declaratory orders and the judgment are a vindication of the work of the applicants, the SJC, Equal Education (EE) and the Nyanga Community Police Forum (Nyanga CPF) as well as our legal team, over many years. This is a victory for poor, Black police precincts that have been confronted with high rates of extreme violent crime on a daily basis. We therefore welcome the court’s finding in this landmark judgment.

A case of discrimination on the basis of poverty & race established

The court found that “the data presented shows that police stations that serve poor, Black areas have the lowest police to population ratios, relatively speaking, as compared to wealthier, rich areas which are predominantly White”. The court noted that these “poor, Black areas also have the highest rates of contact and violent crime”.

The judgment attributes this discriminatory allocation to the Theoretical Human Resource Requirement (THRR), the system enlisted by the South African Police Service (SAPS) nationally to inform its resource allocations. Allocations made in terms of the THRR “resulted in allocations which were skewed and in favour of privileged and historically White areas”. The court found this to be discriminatory on the basis of race and poverty.

Poverty as an unlisted ground of unfair discrimination

In seeking a declaratory order that the allocation of police resources discriminates on the basis of race and poverty, the applicants required the court to establish whether poverty qualifies as an unlisted ground of unfair discrimination.

In a monumental decision, the court agreed with the position advanced by the applicants: poverty should be regarded as an unlisted ground of discrimination because “poverty clearly impacts on the social and economic rights protected in the Constitution as this adversely affects the equal enjoyment of a person’s right and freedom in a serious manner that is comparable to discrimination on a listed ground.”

The inclusion of poverty will further empower poor people in securing greater access to security of tenure, education, sanitation services, water, public transport, well-located and inclusionary social housing, and generally safe and dignified communities. We are therefore encouraged by this court finding. This judgment is a a major step forward for substantive equality and justice in a highly unequal society that still needs major redress to happen post-apartheid.

The discrimination is unfair

The court found that there was a prima facie case of discrimination and that this was based on race and poverty. Judge Dolamo found that the respondents had failed to demonstrate that the discrimination was fair because of the appalling conditions and services that poor Black people continue to live in compared to the way affluent, white people live. This comparison highlights the abject poverty that persists in South Africa. The court emphasised “the unfortunate reality that the residents of Khayelitsha, who are predominantly Black, continue to receive inferior services, including services from SAPS. The SAPS discriminates against this impoverished community by using a system of human resources allocation.”

During court proceedings the applicants agreed to a separate hearing on remedy in the event that the court finds that the system utilised in allocating resources is discriminatory on the basis of race and poverty. We will now work alongside all parties to propose the appropriate remedy to court that we believe will address the flaws that leads to unfair discrimination in the police’s national resource allocation system. In doing so, we will continue to fight for substantive equality and justice.