JOINT PRESS STATEMENT: The #SJC10 case and protecting the right to protest 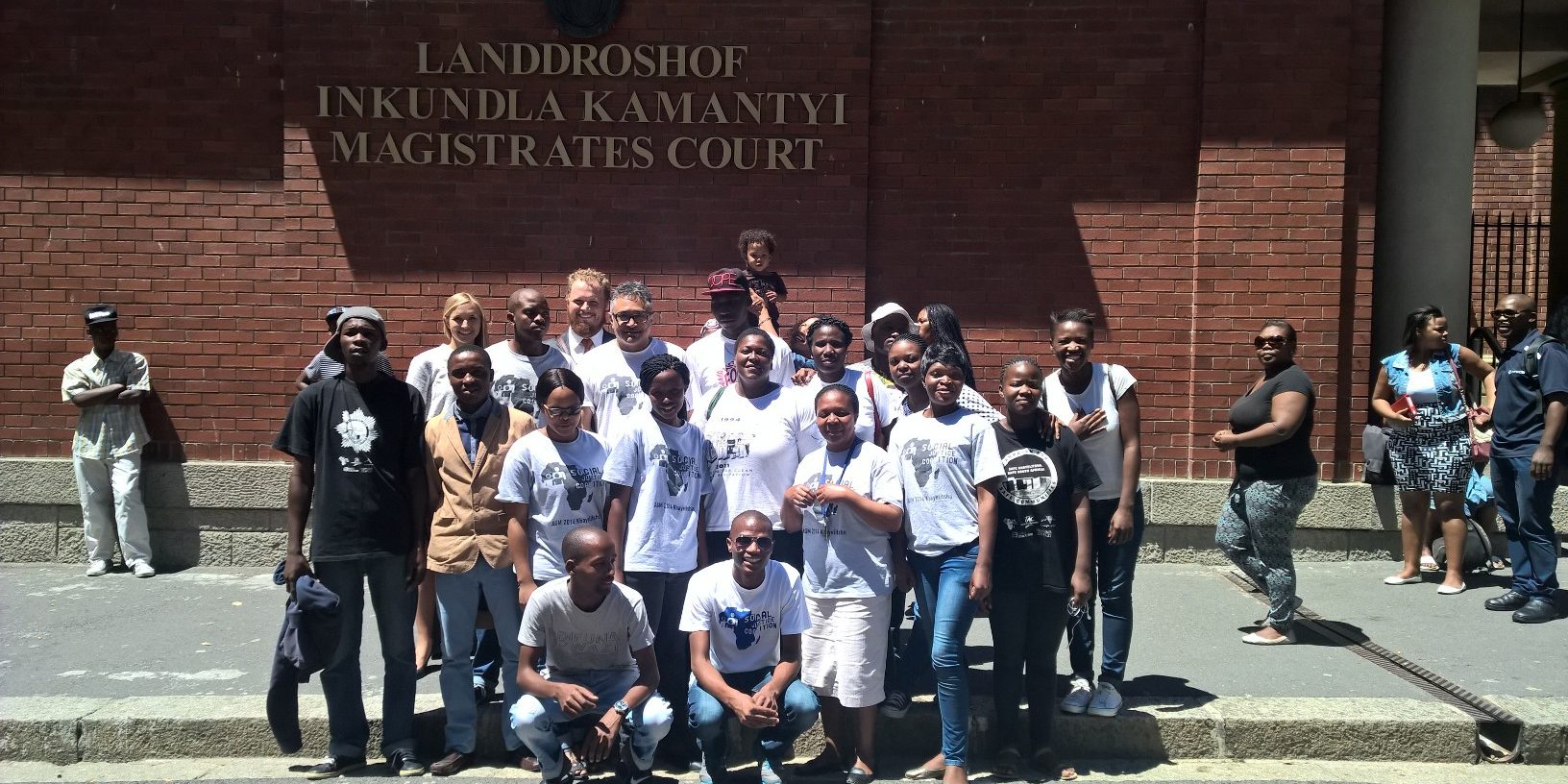 On 14 and 15 June 2017, activists from the Social Justice Coalition (SJC) will appear in the Western Cape High Court to challenge a law that has helped to criminalise protest. This case is a vital legal intervention for the right to protest in South Africa – a right that is increasingly under threat.

On 11 September 2013, 21 SJC members and supporters were arrested and charged with contravening the Regulation of Gatherings Act (RGA). They had staged a peaceful and organised act of civil disobedience outside the offices of Cape Town Mayor Patricia de Lille, chaining themselves to the railings of the Civic Centre. This followed more than two years of attempted engagement with the Mayor that had increasingly been met with broken promises, hostility and refusals. The decision to organise and attend the protest outside the offices of Mayor de Lille on 11 September 2013 was not taken lightly.

In February 2015 the 10 elected leaders who identified as the convenors of the protest were convicted; the other 11 were acquitted. We expected the convictions. When the trial began we admitted the facts and did not deny that the gathering took place, but argued that the RGA itself is unconstitutional and a remnant of Apartheid.

Our appeal application was lodged at the Western Cape High Court in 2016. The ‘SJC 10’ are represented by the Legal Resources Centre. We argue that Section 12(1)(a) of the RGA limits the right to freedom of assembly as guaranteed by the Constitution. It criminalises a gathering of more than 15 people just because no notice was given and is unconstitutional.

The criminalisation of citizens who are exercising their rights outlined in the Constitution is deeply worrying. How can it be possible to end up with a criminal record while attempting to peacefully participate in a democratic society? This should not be the norm. Section 12(1)(a) of the RGA is in conflict with the right to freedom of peaceful assembly. It criminalises people who are simply exercising their constitutional rights.

A criminal record is no small thing, which is why we argue that Section (12)(a) of the RGA is a substantial deterrent that severely limits people from participating in peaceful and legitimate protest.

A number of organisations and institutions agree with our challenge and have now joined the case through amicus applications. These include the Open Society Foundation Justice Initiative, Equal Education, as well as the UN Special Rapporteur on the rights to freedom of assembly and of association represented by the Socio-Economic Rights Institute.

Equal Education (EE) has been admitted as friend of the court in this appeal. EE members regularly organise marches and other public demonstrations to advocate for improvements in their schools.

EE will ask that the court keep EE members and other children in mind when considering the constitutionality of the Gatherings Act. EE will argue that criminalising the right to participate in peaceful protests fails to take into account the importance of the right to protest for children, and their best interests. Since children are unable to vote, protest is an important tool children use to express their ideas, advocate for their own causes and meaningfully participate in the political dialogue and decision-making of the country. Therefore criminalising the convening of peaceful protests, merely for the failure to give notice, has a detrimental impact on children and violates their constitutional rights.

The broader problems with the Gatherings Act

The 1993 Gatherings Act is a relic of our apartheid past.

Even though the purpose of the Act is to enable freedom of assembly, in practice the Act has been abused to stifle and chill protest. Across the country, municipal and police officials have turned the ‘notification’ process into a permission-seeking process, seeking to stifle protest before it has even taken place. Municipalities and police have invented countless reasons to prohibit protests, including demands that the person against whom the protest is directed should agree to accept a memorandum at the protest. Many municipalities, including the City of Johannesburg, have demanded that protest organisers must pay an administrative fee when giving notice.

The hostile climate towards protest and dissent

The #SJC10 case is important because it seeks to defend the right to protest at a time when that right is under threat.

Across the country, in countless struggles and many municipalities, a pattern of clampdowns has emerged. Government authorities have demonstrated a willingness to target those who exercise dissent and protest.

The criminal justice system is often abused to intimidate protest organisers and participants – for example by arresting them for unfounded charges such as public violence or trespassing. In many instances these charges are dropped, but only after the accused have spent days, weeks or even months in detention.

Laws such as the Regulation of Gatherings Act, the Riotous Assemblies Act and the National Key Points Act are regularly invoked to intimidate protesters and silence dissent.

Protecting the right to protest

In light of the systemic abuses of the right to protest, a new hotline advice service is now available for protesters. The Right2Protest project is a coalition of civil society organisations which aims to provide legal advice to support the right to protest. The Right2Protest toll-free advice hotline for protesters is 0800 212 111 (operational during business hours).

We stand in solidarity with the #SJC10 and other activists across South Africa who are defending the shrinking space for political dissent and challenging how power is abused to stifle protest. It is vital that these efforts continue.

The first day of hearings is set down for 10am, Wednesday 14 June at the Western Cape High Court. Supporting organisations will hold a demonstration outside the court.

The criminalisation of citizens who are exercising their rights outlined in the Constitution is deeply worrying. How can it be possible to end up with a criminal record while attempting to peacefully participate in a democratic society? This should not be the norm. Section 12(1)(a) of the RGA is in conflict with the right to freedom of peaceful assembly. It criminalises people who are simply exercising their constitutional rights.