Press Statement: A victory to celebrate: Minister Bheki Cele has it right (for now), while the DA has it wrong 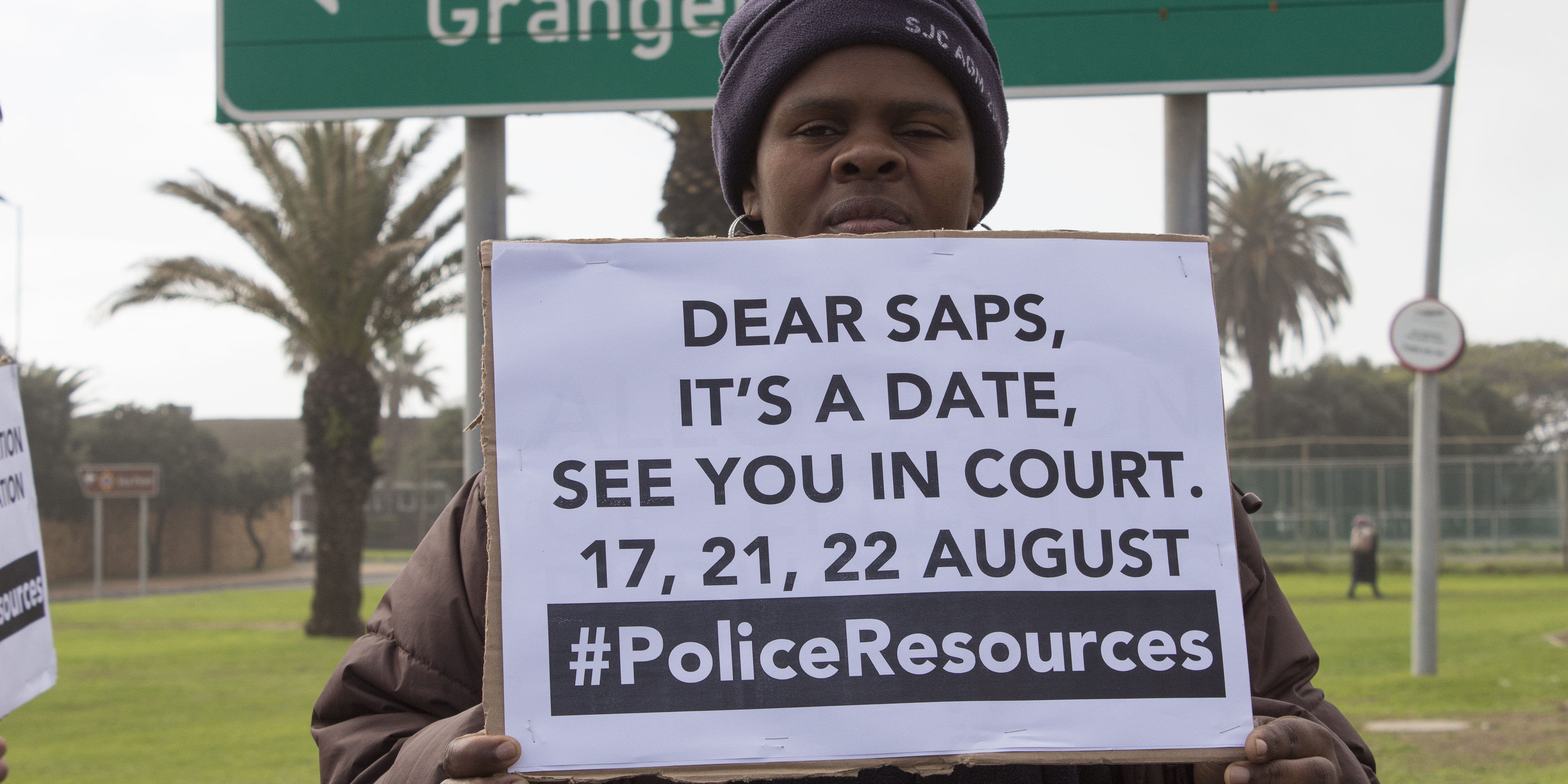 The SJC welcomes Minister Cele’s candid admission that poor, Black police precincts across the country (not just those in the Western Cape) are in fact not getting the resources they deserve and need. We also welcome his admission that the solution isn’t necessarily more police, but instead is a rational reallocation of South Africa’s already sizeable police service between precincts.

We also note his undertaking to abide by the remedy the court is yet to determine in the matter.

Our lawyers, the Legal Resource Centre (LRC), have now written to the state attorney’s office to ensure that all legal steps are taken to withdraw the appeal, as this process has not yet been initiated. We will closely track all developments.

MEC Winde, our victory is to be welcomed, celebrated and not politicised

The SJC welcomes Minister Cele’s candid admission that poor, Black police precincts across the country (not just those in the Western Cape) are in fact not getting the resources they deserve and need. We also welcome his admission that the solution isn’t necessarily more police, but instead is a rational reallocation of South Africa’s already sizeable police service between precincts.

The Minister’s admissions mean that the South African Police Service (SAPS) is now in agreement with what the SJC and our co-applicants, Equal Education and the Nyanga Community Police Forum, have said for years.

The judgment, along with the Minister’s admissions, is a victory for poor, Black people confronted by high rates of violent contact crime. It is our victory.

MEC of Community Safety in the Western Cape and the Democratic Alliance’s candidate for Premier of the Western Cape, Alan Winde, has no right to claim that our’s is a victory that “cannot be celebrated”.

His statements do an immense disservice to the residents of Khayelitsha and Nyanga who fought for and secured this victory.

It is unclear, given these statements, why the Judge did not include KwaZulu-Natal in his declaratory orders. It might be, and this is speculation, because the applicants had not cited the KwaZulu-Natal provincial police commissioner in the case.

Despite limiting the extent of the judgment’s declaratory orders, by stating “in so far as it has been shown to be the case in the Western Cape Province”, the Equality Court’s findings are of national importance.

SAPS is a national competency. The formula used by SAPS to allocate its 193 297 police personnel across 1140 police precincts across the country is called the Theoretical Human Resource Requirement (THRR). The Equality Court ruled that the THRR has been shown, through data presented, to be “skewed in favour of privileged and historically white areas” in both the Western Cape and KwaZulu-Natal.

The reason put forward by the Court as to why the orders around the national allocation of police resources, which is what the applicants sought but weren’t granted, is simply because the data pertaining to the seven other provinces was submitted in replying papers to the court and so could not be considered.

Unfortunately the applicants only got the data for all 9 provinces and all 1140 police precincts  from SAPS during the court proceedings.

This legal technicality, however, does not diminish what the data makes clear. In Gauteng, the police precinct with the lowest police-to-population ratio is Diepsloot with one police officer for every 1257 residents. Rosebank, by comparison, is 1:101. Diepsloot had 67 murders last year. Rosebank had none.

The DA’s fixation on the Western Cape detracts from the injustice of a flawed and discriminatory system of resource allocation that is applied nationally.

Purported shortage of police officers in the Western Cape

The constant refrain from the Executive Mayor Dan Plato, MEC Alan Winde and DA leader Mmusi Maimane about the shortage of police officers in the Western Cape and Cape Town actually undermines the Equality Court’s judgment.

The claim that 85% of police precincts in Cape Town are under-resourced or that there is a shortage of 4 500 police officers in the Western Cape is determined using the exact same formula, the THRR, that the Khayelitsha Commission of Inquiry, the Civilian Secretariat of Police and now the Equality Court, have found to be flawed.

The THRR results in discrimination against poor Black people. A continued reliance on it to argue where resources should be only serves to entrench that discrimination.

The Executive Mayor, the MEC and the leader of the opposition must publicly concede that the THRR is wrong and they must stop opportunistically using it. In addition, until they publicly state that the equitable allocation of police resources would require the reallocation of resources from wealthier, predominantly white police precincts to poor, Black police precincts, they have no solution for ensuring that police are where crime happens.

Another constant refrain and foregrounding of the Western Cape’s provincial and the Cape Town metro’s police-to-population ratios by the Mayor, the MEC and the leader of the opposition, misses the point of what is wrong with the allocation of police resources entirely.

Similarly, police precincts across Cape Town are confronted with disparate rates of violent crime and police-to-population ratios. By using an average police-to-population ratio across the metro, the complexities and policing needs and priorities of Harare in Khayelitsha with one police officer for every 721 people (and 142 murders in 2017/2018) vis-a-vis Rondebosch with a ratio of 1: 178 (and no murders in 2017/2018) are lost.

Provincial or metropolitan police-to-population ratios are not useful because they  have no crime fighting value. It’s about as useful as SAPS pointing out that our national police-to-population ratio is above average. Favourable numbers at these levels, people across South Africa know, have no bearing on what they experience at a precinct level. The ratios at a police precinct level can fall anywhere between the extremes of one police officer for every 1801 people (Flagstaff in the Eastern Cape with 65 murders in 2017/2018) and one police officer for every 154 people (Sea Point in the Western Cape with 2 murders in 2017/2018).

Discrimination against poor, Black wards in the allocation of public lighting

Instead of undermining the Equality Court judgment, wilfully misrepresenting its findings, detracting from the unfair discrimination directed at specific communities, failing to understand the real issues at hand and politicking with people’s lives, the Democratic Alliance would do better to leave the allocation of police resources to those that explicitly name the discrimination and the inequity revealed on the ground in our communities, between precincts and across provincial borders.

As an alternative to being unhelpful, they could focus on addressing the inequitable allocation of the safety resources they are actually responsible for. The Mayor, the Premier candidate and the leader of the opposition would do well to advise the City of Cape Town to immediately develop a reasonable plan and timeframes to roll-out the same effective public lighting on all streets in poor, Black formal areas that is currently provided on all streets in wealthier, predominantly white areas.

In addition, in keeping with the Municipal Services Act, they must ensure the City improves, over time, on the level of public lighting it currently provides to all informal areas which are home to poor, Black residents.

The Equality Court has set a powerful precedent. Our arguments for police resources are the same as our arguments for the equitable allocation of public lighting. Either the DA and the City delivers on effective public lighting or the SJC will see them in court, where we will cite the case we’ve just won. Then, like now, we will celebrate our victory. Then, like now, we will guard our victories and ensure court orders are implemented and services are delivered.