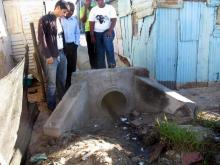 On 8 April 2010 SJC members accompanied Laurence Grootboom – Functional Operations Manager for the City’s Water and Sanitation Department – on a visit to an area of RR section long afflicted by an overflowing sewerage line. This followed numerous efforts by the SJC over the preceding six weeks to have the problem rectified, and a meeting a week earlier with the Mayor of Cape Town and other City officials in which it was raised.