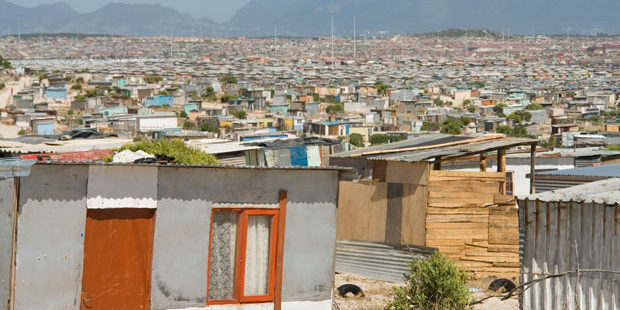 Khayelitsha in Cape Town - one of South Africa's largest and fastest growing townships, with hundreds of thousands living in informal settlements.

Editorial from Mail & Guardian newspaper on Friday 20 April 2012, regarding the pervasiveness of violent crime in South Africa’s informal settlements.

“We need a response on at least two levels. The first is a willingness by national leaders to campaign against both rape and the contempt of women that underpins the act in word and deed. The second is a recognition that we are building settlements that reproduce sexual violence, crime and xenophobia: shoddily constructed, disconnected from economic opportunity, home to failing schools that sit cheek by jowl with shebeens on shit-soaked streets.”

If you want to understand the scale and complexity of the problems facing urban communities in South Africa, you could do a lot worse than visit Bramfischerville in Soweto. From a distance you will see relatively substantial-looking RDP houses, evidence of the massive programme of residential construction undertaken by the human settlements department over the past 15 years.

At the level of budget allocations and intent, the government is trying.

Get a little closer, however, and you will be assailed by the stench of sewage running down the streets. Residents will point out where flood water backing up from a nearby wetland flow through their homes and where crumbling walls have forced the demolition of more than 150 new houses.

At the level of performance, whether because of corruption, mismanagement or simply poor policy design, the government is failing.

The ground is too water-saturated in some areas for streetlights to be installed and walking after dark can be a harrowing experience. Mail & Guardian reporters were repeatedly told about the danger, discomfort and health risks that go with living in Bramfischerville.

Thuli Madonsela, the public protector, is investigating the disastrous state of municipal service delivery in the area. It was here, three weeks ago — at about the time of Madonsela’s visit — that seven teenagers repeatedly raped an intellectually disabled 17-year-old, taunting her as she begged them to stop, filming the attack on a cellphone and distributing it to friends, who sent it out to an outraged audience that was largely unwilling to do anything but consume it.

For three weeks the video was circulated and the girl remained missing. None of the mechanisms of the state or the social welfare system were triggered by her disappearance. It was left to the Daily Sun, so often derided for its sensational coverage of violence, to ensure that the alleged perpetrators were identified to the police, who then arrested them. The newspaper also took the ethically complex decision to publish, with the consent of her mother, the picture of the girl that led to her being found.

The abuse captured on video is just the latest in a series of assaults. In both 2009 and 2010, according to the Daily Sun, cases were dropped against men who allegedly raped her, apparently because her intellectual disability made it difficult for her to give a statement. She has also gone missing repeatedly in the past, her mother has told reporters. It seems none of this triggered any meaningful response. Social services are under huge strain across the country, but none is more starved of cash and staff than mental healthcare, through which this exceptionally vulnerable girl ought to have been protected.

Of course outrage is the correct response to such an awful crime, and on Wednesday talk radio and the social networks were full of it and Gauteng’s MEC for community safety raced to the scene. “Monsters,” screamed the commenters and the headlines. But although moral fury is satisfying, it does little to help us to understand the depth of our crisis of rape and violence.

It is a crisis of multiple dimensions, but there can be little doubt that, in places where work and hope are scarce, where schools are dysfunctional and where state, community and family structures to contain and control violence are absent or overstretched and where alcohol regulations are unenforced, we are creating conditions for an epidemic of brutality.

Bramfischerville is far from being a dire exception.

On the contrary, it looks more and more like the rule.

Last year we reported on a teenager living in a village near Thohoyandou who, having been accused of theft, was stripped naked and repeatedly assaulted by one of her neighbours with a hammer as the man’s young son filmed the incident on his cellphone, lingering on the girl’s breasts and pelvic area. The police and local community leaders appear to have colluded to keep the case quiet. That video, too, went viral. These incidents were passed from cellphone to cellphone as entertainment, making it impossible to look away. They are a tiny sample of what goes on across the country, largely unreported: women and children being sexually assaulted, lesbians being “corrected” and casual harassment and abuse taking place.

South Africa is often called the rape capital of the world. A Gender Links study released last year indicated that 75.5% of men in Gauteng admitted to having perpetrated some form of violence against women. According to recent law enforcement statistics obtained by the Women’s Legal Centre, of the 92 151 sexual assault cases reported to police, 24 253 were withdrawn before they even reached a judge and 48 349 — more than half — were withdrawn at some stage during the court process. Those numbers indicate the terrible fear with which survivors live, even after they have gone to the police.

Of course, rape and domestic violence happen in the richest areas too, behind thicker curtains and in quiet culs-de-sac, but there can be no gainsaying that it is the poorest women who are most at risk. Their exposure is diagnostic of much broader social ills.

We need a response on at least two levels. The first is a willingness by national leaders to campaign against both rape and the contempt of women that underpins the act in word and deed. The second is a recognition that we are building settlements that reproduce sexual violence, crime and xenophobia: shoddily constructed, disconnected from economic opportunity, home to failing schools that sit cheek by jowl with shebeens on shit-soaked streets.

We need to stop. As well as the multibillion-rand programme in economic infrastructure, we need the social infrastructure that makes Bramfischerville the exception, not the awful rule.