You are here:
Press releasesSafety and Justice CampaignUniversity of Cape Town 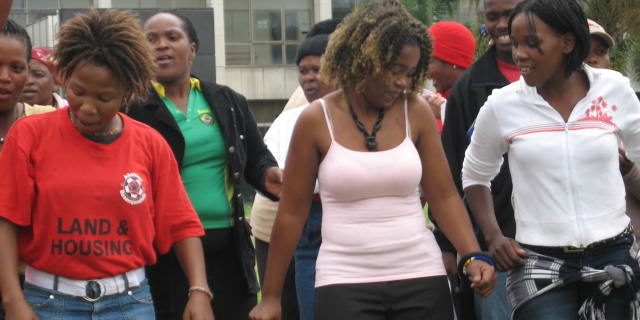 CAPE TOWN – The Kennedy Road 13 returned to the Durban Magistrate’s Court on Monday 26 October to hear the verdict on their application for bail. Once again the ANC mob had been bussed in and there was a further escalation of threats against us. New people were targeted and threatened with death. Even at the Durban Magistrate’s Court, in full public view, we are not safe and our basic democratic rights to speak and associate freely are being denied.
The threats of death and harm from the mouths and at the hands of self-proclaimed ANC members and officials, which started at the Kennedy Road settlement, has followed us into the Court. The violence and intimidation, which started at Kennedy Road, is not over. It is far from over. It continues. Our movement is still under attack, and our members – in Kennedy Road, and now also in other settlements, continue to be scattered by threats of violence. Even as we declare to ourselves and the world that we will not be silenced by the ANC we continue to live in fear that free speech, free movement and free association could get us killed.

The Secretary of our Youth League has now been forced into hiding after receiving public death threats. Armed young thugs followed her from the Court, to the street, to the taxis, to her home (which is not in the Kennedy Road settlement). This is in spite of the fact that the world is watching the ongoing attack on our movement. In spite of the world watching – in spite of protests at South African embassies, on university campuses, in spite of statements by respected church leaders, the former United Nations Special Rapporteur on Housing, and various human rights organisations, many of us cannot return to our homes, many of us remain in hiding and we must still must hold our meetings in secret. In spite of the the world watching, we cannot go to the court without facing young men threatening us with words or weapons. They bring knobkerries and bushknives to court, and openly boast that they are armed and will kill.

Yesterday at Court, the ANC again sent two hired buses with people to intimidate us. Most of the self-proclaimed ANC members on the buses were not from Kennedy Road.

Inside the Court yesterday, there was pushing, shouting and shoving – once again, Abahlali members were physically prevented from entering the courtroom.

Inside the Court yesterday, when the judge came in, those from the ANC buses held up signs on big flowchart paper with different colour slogans such as “Asikufuni Zikode Nababulali” (We don’t want [Abahlali President S’bu] Zikode and the killers).

Outside the Court, those from the ANC buses were toyi-toying outside a gate. When our members stood together quietly, far from the gate, to be briefed about the result of the bail hearing, a group from the ANC buses, mostly young men, moved toward us, shouting and threatening us. They came very close. We just stood quietly.
A Reverend from the Diakonia Council of Churches tried to calmly step between us and the young men. He asked them to please be calm and stand back. Some of the young men began shouting at him in English and isiZulu: “You are just an umlungu!”, “You are supporting the killers!” and “We can kill you!”

If this is ‘just a matter for the community’ what is an ANC councilor from another ward doing with bussed-in ANCmembers from outside of Kennedy Road and issuing death threats to respected church leaders at Court? What are Jackson Gumede, Yacoob Baig and other ANC officials doing at Court, watching, as men – visibly armed and wearing ANC t-shirts – openly threaten us, calling for the death of the Secretary of our Youth Leauge, our Women’s League Chairperson, and our other leaders? Why are AbM leaders from outside of Kennedy Road being threatened? Why is S’bu Zikode being targeted when he was not even in Durban on the night of the attack on our movement? It is completely obvious that the ANC is waging a political attack on our movement.

The Kennedy 13 were not given bail and remain in Westville Prison. The magistrate will take a final decision on their application for bail on Monday next week.

Abahlali baseMjondolo, together with with Landless People’s Movement (Gauteng), the Rural Network (KwaZulu-Natal) and the Western Cape Anti-Eviction Campaign, is part of the Poor People’s Alliance – a national network of democratic membership based poor people’s movements.