You are here:
Good GovernancePress releases 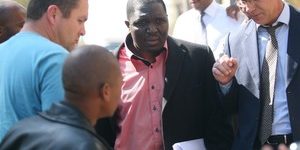 A free press is essential to democracy, transparency and the attainment of equality

We are organisations that campaign for social justice. The success of our work is dependent on respect for the Constitution, especially the Bill of Rights. The right to free expression and freedom of the press and other media are essential components of democracy. That is why they are contained in the Bill of Rights. They are one of the essential means by which all people in South Africa, especially the vulnerable, exploited and poor, can hold government and the powerful private business sector to account.

This week Mzilikazi wa Afrika, a Sunday Times journalist, was arrested in Rosebank Johannesburg. The circumstances, manner and cause of his arrest all seem to point to intimidation by the state and attempts to suppress freedom of expression.

The arrest follows the exposure by the Sunday Times of questionable dealings by the National Police Commissioner, Bheki Cele. It comes during a national debate over proposed legislation to curtail press freedom, i.e. proposals for a new Protection of Information Act, changes to the Criminal Procedure Act and the ANC’s proposals to establish a media tribunal.

We therefore unequivocally condemn the arrest of wa Afrika.

The media in South Africa, as anywhere else in the world, is very powerful and influential. We are not blind to its many shortcomings. The quality of journalism in South Africa is often mediocre. Newspapers, magazines and television sometimes make serious errors, permit unethical advertising and sometimes make false charges against individuals.

We are concerned that the main media houses are overly concentrated in the hands of a few large corporations and consequently primarily represent the interests of a relatively small affluent portion of the population, thereby paying insufficient attention to the interests of poor and working class people.

But having said all this we restate that the non-negotiable starting point for this discussion is agreement that a free press plays a critical role in holding government, the private sector and their media competitors to account. Draconian anti-media legislation will make this impossible.

Over recent years there have been many occasions when serious media investigation and publication has helped to root out corruption and, expose wrongdoing and unethical conduct. This is vital to the reconstruction of SA. Thus the exposure and ultimate conviction of corrupt former Police Commissioner, Jackie Selebi, was a direct result of investigative work by the Mail & Guardian and others. Thabo Mbeki’s deadly AIDS denialism was justifiably the source of media condemnation. The media’s role in highlighting campaigns for social justice is also critical, for example the shortage of school libraries, the rollout of an unsafe circumcision device in Kwazulu-Natal, the failure to provide private toilets in parts of Khayelitsha, the harassment faced by sex workers and hate crimes against foreigners, women and gays and lesbians.

Unfortunately, we believe the crackdown on the media being encouraged by parts of government, some in the ANC and probably influential ‘tenderpreneurs’ and predatory elites is not aimed at improving the quality and responsibility of the media, or making it more equal. Instead it is aimed at hiding corruption, frustrating accountability and covering up service delivery failure. These are problems that now permeate every level of government; at national level, in all nine provinces and in most districts.

The Constitution was won by the sweat and blood of people who opposed and defeated apartheid censorship and repression. A brave, even if unfree, media played a part in this. We therefore wish to issue a warning to the Cabinet and all those groups and individuals that we will campaign against all attempts to undermine press freedom and the Constitution. We are committed to equality, social justice and honest government. We will defend the Bill of Rights. We will not be intimidated and we will not stand by and let the erosion of our fundamental freedoms happen.