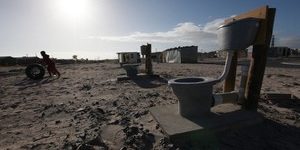 1.The Social Justice Coalition (SJC) welcomes and applauds the decision by the Cape Town City Manager, Achmat Ebrahim, to launch an investigation into the building of the unenclosed toilets in Makhaza, Khayelitsha (“Cape council probes decision on open toilets”, 24 August 2010 Cape Times). We hope that this decision will lead to a speedy resolution of this unhappy debacle, and that the findings of the Human Rights Commission will be adhered to.

2.From the onset the SJC has been calling for better consultation between the City of Cape Town and the residents of Makhaza and hopes that the City will take up Archbishop Thabo Makgoba’s offer of mediating this process and move forward with these discussions.

3.In calling for the investigation Grant Pascoe, mayoral committee member for social development, refers to Section 9 of the Water Services Act, which states that “the minimum standard for basic sanitation services is a toilet which is safe, reliable, environmentally sound, easy to keep clean, provides privacy and protection against the weather”.

4.The SJC hopes that this definition will be followed through to other informal settlements and areas in Cape Town where residents are using sanitation systems that do not fulfill the above criteria. Over the last two years the number of black buckets being serviced by the City has not reduced – there are still 3915 bucket toilets being serviced by the City of Cape Town. While container toilets – basically larger, permanent bucket toilets – are used by approximately 37500 households in the City’s informal settlements.

5.Currently there is no directive of which toilet variants do not conform to basic sanitation standards and this has allowed water service authorities throughout the country to supply toilets that are inadequate and in convention of Section 9.

6.The SJC hopes that the important and distinctive steps taken by the City yesterday are the beginning of a move in the right direction and this open acknowledgement of basic sanitation, as defined by the Water Services Act, enables this definition to become the criteria used in the provision of adequate sanitation systems in Cape Town’s informal settlements.

7.Further we hope that this unhappy experience has highlighted the need for adequate and accountable consultation between the residents of a community and local government and that consultation with communities improves as a result of it.

The Social Justice Coalition is a community-based activist organization that promotes active citizenship, accountable governance and the advancement of the social justice obligations and rights enshrined in the Constitution. These include the protection of the rights of every person in South Africa to be free from violence (both public and private), as well as the rights to decent housing and safe transport, streets, schools, playgrounds, clinics and homes.
Since the beginning of 2010, the SJC’s primary campaign has focused on calling for access to safe and clean water and sanitation services for all people in Khayelitsha.