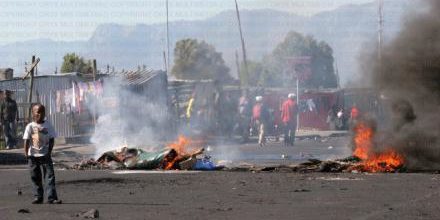 1. The need for mass organisation to overcome social inequality has never been greater.

2. In 1994 African and Coloured poor and working-class townships and rural areas celebrated freedom from White rule. The hope that hunger, unemployment, the bucket toilet system, apartheid education and homelessness would be addressed as a permanent priority of government lived in people’s hearts. It was hoped that health services would be improved and income inequality reduced.

3. We know that freedom has brought many improvements. Millions of people gained access to welfare grants, water, homes and clinics. We can march peacefully to our elected Parliament without being shot. We can join unions and organisations. We can go to the courts against evictions and for HIV treatment. These are some of the great gains that we must defend and advance. But the government has not made the needs of urban and rural working-class and poor people its priority.

4. Twenty years after the release of President Mandela and his comrades, and the unbanning of the ANC, and sixteen years after political freedom, income inequality is worse than ever before. More people than ever have no jobs, the indignity of the bucket system and toilets in the bushes continues, and education inequality and ill-health remain a part of the system of government and South African capitalism. As a result our sons and daughters turn to alcoholism, drugs and crime. They terrorise their families, neighbours and communities.

5. Meanwhile black and white capitalists, ex-homeland bureaucrats and other elements of a predatory elite are using the ANC to take the wealth of the country for themselves and keep it from poor and working-class communities. At local, provincial and national level, government protects and promotes corrupt, lazy and incompetent “managers”. The bosses have the greatest freedom capitalists have ever had in South Africa and pay the lowest taxes.

6. People are angry across our country and in every community. Anger is justified because government is abusing our trust and vote. Many people say: “Life cannot continue in this way.” Others take to the streets in protest that sometimes turns violent. We know that mindless violence and chaos have never brought freedom, decent jobs and a better life. Freedom and social equality comes through patient organisation, education and sustained struggle. It comes through building the collective power of communities.

7. The struggle for social equality and justice requires serious organisation and a clear programme for change. It requires collective leadership with the understanding required to lead millions of people over years, not a few hundred who throw stones for a few days and become cannon-fodder for self-appointed leaders.

9. A few weeks ago Abahlali baseMjondolo Western Cape, supported by some elements of the ANC Youth League and other community organisations, called for a “general-strike of informal settlements” to bring production in factories and shops to a standstill. They proposed to make the City “ungovernable” and cause “chaos throughout the City”. They openly encouraged residents to burn tyres, block roads and throw stones and rubbish. This call is immature, ignorant and shows contempt for our communities. The poor and working-class people of Khayelitsha cannot advance their struggle in this way. To build their own power they need patient organisation and unity with people from Cape Town to Mitchell’s Plein, Gugulethu to Manenberg.

10. For more than two weeks now, the actions of Abahlali baseMjondolo Western Cape have punished poor and working-class people in Khayelitsha. They have encouraged the police to become a law unto themselves and have prevented services such as refuse collection and water maintenance. Ambulance and fire services – already over-stretched – could not reach affected areas, or had to deal with “barricades” and attacks from protestors hurling stones.

11. In the name of Abahlali baseMjondolo Western Cape, young unemployed people are being used to intimidate their communities but this has failed to bring anything to a “standstill”. At most it has inconvenienced and endangered workers and the unemployed who use public transport including many elderly people and motorists.

12. The irresponsible actions of Abahlali baseMjondolo Western Cape are helping the state to criminalise struggle and dissent. They are strengthening the attacks on working class organisations by Helen Zille, Dan Plato and the national government’s police, army and intelligence agencies; allowing them to use the argument of “maintaining law and order” while inequality remains unchanged. Working class people, informal traders and Khayelitsha residents need to be able to get to work and access services and hence many will sympathise with this call for “law and order”. In this way Abahlali’s false militancy divides the poor and working class and weakens organisation and real struggle.

13. COSATU Khayelitsha, The Treatment Action Campaign, the Social Justice Coalition and Equal Education have for years worked seriously in Khayelitsha and elsewhere. We have never advocated stone-throwing or promoted violence. Our members work patiently, educate themselves and build local leadership to change the system of inequality. We ask all progressive people in churches, clinics, schools, universities, homes, and local organisations (in Khayelitsha and elsewhere) to distance themselves from mindless violence and calls for chaos that harm the poor and working class and their organisations.