You are here:
Makhaza Toilet Campaign 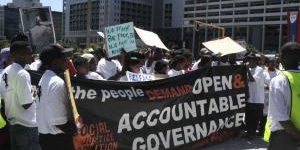 On 24 August it was reported that Grant Pascoe, mayoral committee member for social development, had called for an inquiry into Makhaza. The SJC contacted the City on 27 September and inquired as to the progress of the report and when it would be made public. In August/September 2010 the City of Cape Town carried out an inquiry into a number of toilets that had been built in Makhaza without walls and roofs. Given the difficulties the people of Makhaza have experienced regarding access to safe and sanitary toilets, this investigation was welcomed as a positive initiative and viewed as an acknowledgment that real issues still remain and need to be dealt with urgently. It was assumed that the investigation would be an open process and that the final report would be made public in order to highlight the problems and create a plan of action. This was not the case.

Instead, the City of Cape Town conducted a closed investigation and it denied the SJC access to the report.

On 6 October the Acting City Manager, Mike Richardson, confirmed a formal investigation had taken place. The nature of the agreement made between Makhaza residents and City officials was examined and ‘the investigation found that the officials concerned who had engaged in negotiations with the residents and concluded the agreements did so with “the best of intentions”, but that such agreements would not be acceptable again. In future, national standards were to be strictly adhered to’.

The response further indicated that the City had “no intention” to make the report public or furnish a copy to the SJC, and also made it clear that it felt it had no responsibility to do so. This is simply unlawful conduct. The fact that this report holds valuable information that could benefit future consultations between communities and the City necessitates it being made public.

On 13 October 2010, the SJC made a formal access to information request (refer to Annexure A) through Open Democracy Advice Centre (ODAC). This application has been lodged under the Promotion of Access to Information Act No 2 of 2000 (PAIA).

We protest today for access to the Makhaza Report immediately. The report is either a good one that shows a clear way forward, a perfunctory exercise or a whitewash.  It is in the interest of the public and government to give everyone access to the report and for its contents to be made available to the media.

Governments, corporations and the powerful rely on secrecy to maintain inequality, incompetence, and injustice. On the 19th October 1977, the apartheid state banned the World and Weekend World newspaper and detained its editor the late Percy Qoboza and many other without trial.  Today, our country is threatened with two serious assaults on freedom – the Protection of Information Bill and the so-called Media Tribunal. Access to information is the lifeblood of democracy.

As a constituent organisation of the Right to Know Campaign, we refuse to return to closed government and society where politicians, officials, corporations and the powerful alone enjoyed freedom.

1. The immediate and unconditional release of the Makhaza Report in the public interest and to avoid a costly legal process.

2. That access to the Makhaza report will not be denied if the City exercises its right to wait the period allowed by PAIA before releasing it.

Social Justice Coalition response to the call for an investigation into the building of the unenclosed toilets in Makhaza, Khayelitsha
August 25, 2010

Archbishop of Cape Town to lead visit to Khayelitsha in order to assess toilet situation
August 23, 2010