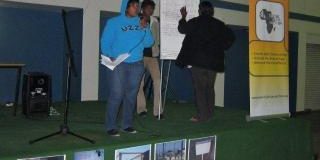 On 19 April 2010 the Social Justice Coalition held a mass-meeting in the OR Tambo Hall in Khayelitsha, to discuss sanitation and safety in informal settlements – issues identified by the surrounding communities as principle areas of concern.  Approximately 500 residents were in attendance.

SJC Secretary Axolile Notywala opened the meeting by introducing the SJC’s campaign for Clean & Safe Toilets in Cape Town’s informal settlements. A speech by SJC Educator Akhona Siximba explaining how this focus tied into the SJC’s core mission of “Safety and Security for all” was followed by Co-Chairperson Angy Peter’s summary of the interconnected issue of sanitation and safety in informal settlements.

With approximately 47, 650 households having no access to a toilet (figure taken from The Water Dialogues: Cape Town Case Study, 2009) in Cape Town’s informal settlements, many people are forced to relieve themselves in bushes or use public toilets far away from populated and relatively safe areas. Angy indicated that this has led to a wide range of safety threats including where people have been hit by cars while crossing the road, attacked, raped and even murdered on their way to relieve themselves.

Further health hazards arise due to generally unhygienic conditions. Angy told of one RR section resident who has had a manhole spewing raw sewage by her home for well over a year. Her three young children are regularly ill with diahorrea as a result. Many other residents (particularly children) get sick regularly due to the poor hygiene standards in and around toilets and water sources. More than 100 000 households (or approximately 500 000 people) have access to toilets that still do not meet basic sanitary requirements in the City of Cape Town. Angy gave the example of the Porta-Potti system – in which Porta-Potti “bucket” toilets are supposed to be collected and serviced by an external service provider – which is not working because the toilets are not being collected consistently, and thus become a repository for germs and disease.  Residents are also insufficiently briefed on how to use this potentially hazardous device properly.

Various community members enquired as to what actions the City are taking to alleviate the sanitation problem. As illustrated in the City’s response to the SJC’s Queue For Safety & Sanitation (see here), it has largely refuted the notion that current sanitation provision in Khayelitsha is inadequate, despite much evidence to the contrary. In response to the SJC’s calls for urgent repair to existing facilities, officials have on occasion asserted that the problem lies with local communities not maintaining the toilets provided, and not with them. Angy noted that while the community should be responsible in terms of correctly using toilets, when there were more than ten households using a single toilet difficulties would occur, and that the City has a duty to intervene. The inconvenient truth for the City is that its negligence in servicing existing toilets and its lack of will in constructing additional facilities has created this situation where toilets are damaged and overused. Angy urged communities to call upon the City to provide more toilet facilities, and maintain existing facilities regularly.

The final items of the meeting included a request by another resident for further information on the issue of toilets, as she had not heard the issue discussed before. She revealed that the shared toilets that she uses in Taiwan Section are not functioning or flushing. A concern was also voiced that incorrect information regarding sanitation had been disseminated to the communities by the City. Angy assured the audience that any inaccurate data would be investigated and offered the SJC’s assistance in providing all interested parties with accurate information on the inadequate sanitation facilities in Cape Town’s informal settlements.

The SJC will continue to gather feedback from the community during weekly branch meetings, and will continue to host further mass-meetings to facilitate broader community dialogue. If you require information or support on the issue of sanitation and safety please contact the SJC on 0213618160.