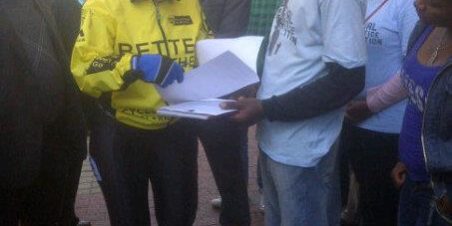 Welcome Makele and fifteen other SJC leaders hand over an open letter to Western Cape Premier Helen Zille on 15 June 2012.

This letter from some SJC branch leaders was hand delivered to the Office of Premier Helen Zille on 14 June 2012, and printed in the Cape Times on 15 June 2012

In October 2011, five hundred Khayelitsha residents from the Social Justice Coalition (SJC) and partner organisations gathered outside your office to call for a Commission of Inquiry – in terms of Section 206(5) of the South African Constitution – with powers to investigate the continuing failures of the police and the criminal justice system to address unacceptably high levels of crime. While crime affects everyone, it is particularly bad in poor townships containing large numbers of informal settlements like Khayelitsha. In these areas crime has continued to flourish, and the fear felt by residents is increasingly turning to frustration, anger and violence.

In December 2011, representatives of the SJC met with you to discuss this request. You stated that in principle you agreed that a Commission of Inquiry should be established and that crime and policing in Khayelitsha had been an area of concern for many years. However, you requested that time be given to consult lawyers regarding how this could best be done in accordance with the law. Another meeting was held in March 2012 and following this, upon request, we have provided further examples of the problems raised in our main complaint.

Since we lodged our complaint, crime has continued to plague our communities. Each day our friends and neighbors are robbed, beaten, raped and murdered. We cannot walk to communal toilets or public transport to get to and from work without fear of falling victim to crime. When we try to report crimes to seek justice, we are turned away from police stations or treated very poorly by officers. When crimes occur and we report them, police often don’t arrive at the scene at all. If a case makes it into the courtroom, it can drag on for years or be thrown out due to bungled investigation or corruption. We see Metro Police and the Anti-Land Invasion Unit enter our communities not to protect us, but often to illegally evict us and destroy our homes.

Safety and justice are not rights but luxuries in Khayelitsha, and in other poor communities across the Western Cape and South Africa.

In light of this crisis, it is no surprise that communities have taken the law into their own hands. In Khayelitsha over the three months at least nine people alleged to have committed a crime have lost their lives at the hands of mobs – angry residents who no longer believe the police or courts will keep them safe or respond appropriately. Some have been brutally killed through the practice of necklacing – the act of placing a tire around someone’s head, which is then set alight. These scenes remind us of the days of Apartheid, where communities could not rely on the State for protection.

Such actions must be strongly condemned, as everyone has the right to life and a fair trial.  However if no action is taken, frustrated communities will continue to see no alternative but to deal with crime themselves, slowly eroding the rule of law. Such tragedies clearly illustrate that trust between communities and the police and criminal justice system is broken.

A Commission of Inquiry would serve as an important start in identifying why the criminal justice and policing systems continue to fail us. It will reassure communities that government acknowledges the scope of the crisis, and is acting to address it. Such an Inquiry would not only benefit the Western Cape. Dr. Johan Burger – a Senior Researcher at the Institute for Security Studies – recently noted that it would also have benefits nationally. We want a Commission in Khayelitsha – and the recommendations that it produces – to serve as a blueprint for other areas experiencing similar problems.

Premier Zille, over the past six months you have committed to announcing whether or not you will establish a Commission.  This has been more than enough time to secure legal advice. You indicated to the SJC in April that a decision was going to be made by early May. Your recent response to a parliamentary question indicated that you were going to be making your decision in mid-June. As branch leaders and executive members of the SJC and also as Khayelitsha residents living in fear of crime, we call on you to establish a Commission of Inquiry to begin the long but vital process of creating safe communities and restoring faith in the rule of law.