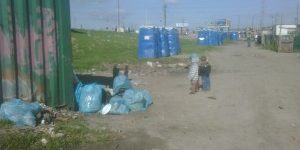 The recent outbreak of an epidemic of severe enteritis in Germany should certainly make us sit up and take note and action. This particular epidemic was most unusual in that the cause was a highly toxic and virulent EHEH variant of the common E coli bacterium. E coli bacteria are relatively harmless inhabitants of the normal human gut. It is of note that this outbreak occurred and spread fairly widely in a country known for its high standard of sanitation and hygiene. The consequences of an epidemic of this nature possibly occurring in the informal settlements in this country are too horrendous to contemplate.

Recently our attention has been drawn repeatedly to the plight of our fellow citizens in our informal settlements and Khayelitsha in particular: on World Toilet Day (20 March 2010) some 600 people stood in a queue outside the public toilet on the Sea Point Promenade. They did this to draw attention to the many thousands living under circumstances where functioning toilets within ready access are a rarity.

On Freedom Day Anglican Archbishop Thabo Makgoba led a protest march from the Cathedral to the Mayor’s Office demanding improved sanitation.  Then there was an open letter to our newly elected Mayor, Councillor Patricia de Lille, published in the City Press on 5 June 2011. The letter was signed by Axolile Notywala, General Secretary of the Social Justice Coalition based in Khayelitsha.

During the pre-election weeks mortality data for this informal settlement and other regions of the metropolis were reflected and debated in your columns.

A visit to an informal settlement is an informative exercise. As you take Mew Way off the N2 you are almost immediately confronted by a large battery of mobile ‘chemical’ toilets on the right. They face the houses with their backs to the road.

The first turn to the left leads into Landsdowne Road with Khayelitsha’s Section RR, possibly the most underserved community in the area, on the right. Many of the dwellings are not visible as they lie below the level of the road. When you get a view of them you can see a little stream running down the valley- apparently emanating from an  immense battery of toilets on the next street corner.

Whenever an opportunity arises to look down some of the tiny lanes or the occasional  track winding its way between these densely packed shacks one is struck by the absence of refuse and dirt. Here and there one can see some clean washing hung out to dry. But there are no toilets to be seen.

What does Mrs M. do if her child needs to relieve herself during the course of the day? Does she drop everything, lock the house and wander off to the distant toilet? Or does she send the little five-year old to fend for herself, praying that she will not encounter any of the many potential hazards. To do this in the dark means facing the risk of assault or even rape. It may be easier to relieve oneself in any little open space. To add insult to injury the toilet allocated to your household may be out of order or possibly locked by someone else.

In the light of these unpleasant circumstances it is not surprising that out of all infrastructural inadequacies it is lack of access to safe and clean toilets that the community has high-lighted as its top priority.

The City of Cape Town acknowledges that there are at least ¼ million people that do not have a minimum standard of basic services (Some claim that this figure is closer to 500 000.). The City’s Informal Settlements Master Plan (2009) aims at one toilet per 5 households, each sustaining five people. At the same time admits that currently it may be 100 to 150 people using one toilet.

The Infant Mortality Rate (IMR) and Under-5 Mortality Rate (U-5MR) are globally regarded as amongst the best indicators of the health of a community. In Khayelitsha around 60 children out of every 1000 born alive die of diarrhoea-related illness before their 5th birthday – 10 times more than in our southern suburbs. The fact that under the prevailing conditions this number is not appreciably higher could be ascribed to households doing their utmost to maintain as high a standard of household hygiene as possible. This is remarkable considering the additional factor of difficult access to safe water; to have a water stand-pipe within 10 meters of your house in Section RR would be considered a luxury. Moreover, the so-called ‘grey water’ surrounding the base of the stand-pipes is known to be heavily contaminated by dangerous E coli organisms.

When faced by these almost insurmountable challenges what could be achieved in the short and medium term?

This is where the Social Justice Coalition (SJC) has done some essential foot work. Based in Khayelitsha with no less than 1000 local and city-wide members the organisation has achieved invaluable collaboration with the community. It has been shown in cities around the world that sustainable upgrading of communities can only be achieved with the full and active participation of its members.

What then, apart from the community itself, are the resources available to the City?

Implementation of Key Family Practices of the CIMCI can offer the child protection against these infections and its potentially disastrous consequences. This calls for outreach teams, such as Philani or other community health workers to empower parents and the community to provide low-cost nutrition and State sponsored supplementation. Furthermore, home-based implementation of primary health care measures would prevent immediate and long-term complications of diarrhoea. These  are low-cost instruments which will make minimal demands on the City’s budget.

With these resources to hand it now requires a fully well orchestrated collaborative intersectoral effort to lift the Khayelitsha community out of this totally unacceptable, polluted quagmire. It is absolutely essential to mobilise true bottom-up community participation and to remove the matter out of the political football-field.

There is an urgent need, with full community participation and intersectoral action to:

In conclusion it must be stressed that the effects of diarrhoeal illness are manifold: the illness almost always causes some interference with the child’s nutrition. Should this occur in a child that is already nutritionally compromised the risk of death is appreciably higher. If diarrhoea persists malnutrition gets worse and the child’s chances of recovery are reduced. Any child with diarrhoea needs to remain at home to be managed appropriately and to prevent cross- infection of other children. Beyond that it stands to reason that HIV-infected children are more far more susceptible to gastro-enteritis and its serious consequences.