You are here:
ArticlesKhayelitshaSafety and Justice Campaign 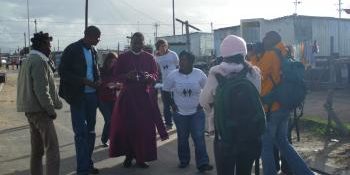 In this letter the Archbishop calls for:1. The Mayor to commit to adhering to the recommendations made by the Human Rights Commission;
2. The Mayor to acknowledge that there were serious flaws in the Makhaza arrangement;
3. That all relevant parties sit down to discuss how best to implement the HRC recommendations;
4. That a community meeting be held, which the Archbishop would be willing to chair.

The SJC welcomes the Archbishop’s call to put the needs of the community first, and the need to resolve the current impasse speedily. We feel that he is a respected and non-biased community leader, and as such is best placed to serve as a mediator. We urge the Mayor and the Premier to accept the Archbishop’s proposal.

I respectfully, write to you as a religious leader, after the example of Jesus Christ, who has a preferential option for the poor and marginalized. In all that Jesus did and said , he upheld the dignity and sanctity of each individual as created in God’s image. I write to voice my concern at a potentially explosive situation at Makhaza which seem to suggest that God’s people are desperate for your compassionate and decisive leadership before their grievance turn into more turmoil for larger society.

Furthermore, I write as a resident of Cape Town concerned by the events at Makhaza over the past few months. The installation of unenclosed toilets has resulted in hundreds of people being deprived of their fundamental rights to health and safety, but most importantly, dignity. I understand that the situation is complex and blame should not be attributed to one particular party, and as such I am writing to offer my assistance to attempt to find a solution to the current impasse. I have suggested some capacities in which I could assist below.

I was very saddened when two weeks ago, toilets provided by the City were demolished by community members and various community leaders. However, the photographs taken last week of armed policemen – in action reminiscent of the dark days in our history – demolishing the remaining toilet structures, leaving the poorest and most vulnerable in the community even more destitute upset me greatly. I was further distressed to learn that the City not only removed the toilets, but the standpipes, leaving affected residents without access to water.

It is clear that the issue of inadequate sanitation is not unique to Makhaza. At least 10.5 million people in South Africa do not have access to basic sanitation, as defined by the Water Services Act (DWAF, 2010). According to recent research, 500 000 Capetonians currently do not have access to basic sanitation (Water Dialogues, 2010). The lack of adequate sanitation in poor informal settlements drastically contributes to incidence of violent crime and ill health. As housing backlogs continue to grow, local government has a mounting duty to deliver essential services such as basic sanitation, which can provide considerable improvements to the quality of life of the most impoverished.

It is also clear that if left unresolved, the Makhaza situation could lead to unrest spreading throughout Cape Town’s informal settlements, and perhaps elsewhere in the country. Last week’s violent protests stand testament to this. It is time for cool heads to prevail. I would therefore like to suggest the following:

That the Mayor – as leader of the sphere of government directly responsible for water services – commits as soon as possible to adhere to the recommendations made in the recent Human Rights Commission findings.

That the Mayor acknowledges (as the Premier already has done ) that there were serious flaws in the process adopted in Makhaza. This is crucial in regaining credibility to effectively negotiate a settlement with the residents of Makhaza.

That the Mayor calls for a public meeting which would include community leaders, community members, civil society organisations, and representatives from Provincial and National Government. I would be most happy to Chair this meeting, should I be invited to do so. I would like to request a meeting at Bishopscourt , upon my return from London in June,( from the 14 th onwards) to discuss the above concerns and requests.

Yours in the service of Christ

The Most Revd Thabo Makgoba
ANGLICAN CHURCH OF SOUTHERN AFRICA